While Kit Kats may be Victoria Justice’s favorite candy and Tootsie Rolls may be Jackson Nicoll’s most prized treat on Halloween, there is no doubt that everyone’s favorite (calorie-free) pleasure on Halloween this year will be Fun Size, in theaters Oct. 26.

Related story Kim K Got Brooke Shields, Juliette Lewis and Chelsea Handler To Pose in Their Bras for Her New SKIMS Launch 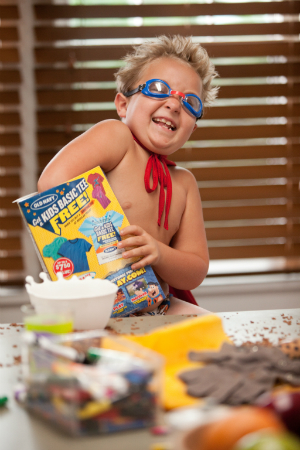 This outrageously funny movie takes place on Halloween night. Wren (Victoria Justice) is forced by her mother (Chelsea Handler) to go trick-or-treating with her kid brother (Jackson Nicoll) rather than attending a Halloween party that could make or break her popularity.

Picture your most memorable Halloween night: now add toilet paper, a car being towed and a chicken fiasco and you have only very few of the many tricks the cast of Fun Size had to endure during their bewitching night.

With so many pranks throughout the movie, it’s hard to believe Thomas Mann, the “nerd” of the movie who teams up with Wren to find her little brother, when he says, “We were actually pretty tame,” after being asked if any pranks were played on set.

The director of Fun Size, Josh Schwartz, offers a different perspective. “When Johnny Knoxville met Jackson, it was like instant ‘bromance,’ they fell in love with each other.” Josh continued by blowing Jackson’s “tame” cover. “Johnny realized that Jackson’s height was such that at the cast party, if he threw a punch at the men he could bring them to their knees pretty easily if you know what I mean.”

Watch our interview with Josh Schwartz

Despite his antics, Jackson reveals that “my costume is Cupid,” when asked about what he might be dressing up as for Halloween this year.

As for the rest of the cast, they have yet to decide what disguises they’ll be wearing on the spookiest night of the year.

Watch our interview with the cast

Thomas actually mentions with a huge smirk on his face that “Fun Size is getting in the way of our Halloween plans,” clearly not at all distressed by the prospect.

For the rest of us, Fun Size has enough tricks and treats to satisfy everyone’s cravings for a Halloween night adventure — no costumes necessary.