It’s a big night for revealing secrets in The Hamptons and this time, someone is going to pay a big price. 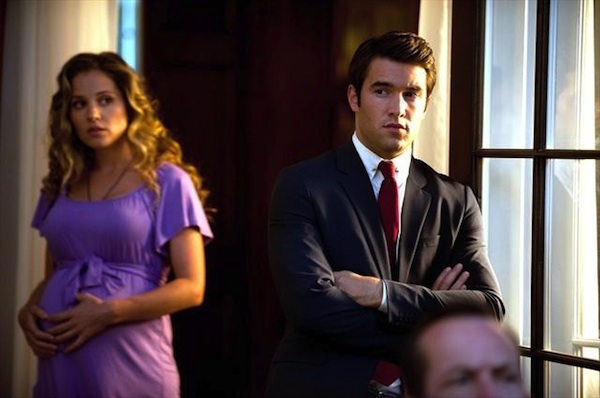 It’s no secret how Jack (Nick Wechsler) feels about the Graysons, but he finally puts his foot down with Amanda when she receives a $5,000 gift card from Charlotte (Christa B. Allen) for the new baby. He demands that Amanda return the gift card because there’s no way the Graysons are going to buy their way into his family. He’s a smart man. He could, however, be smarter since he seems to have no idea about Declan’s (Connor Paolo) new hobby: breaking and entering.

On the other side of town, there’s a dead White-Haired Man bleeding out in Emily’s (Emily VanCamp) living room. It turns out he actually has a name, Gordon Murphy, and the big secret he’s been hiding is, dun dun dun… Emily’s mother! It looks like the two were having an intimate relationship. Kara left a voicemail on his phone that ends with “I love you.” Makes you wonder why he’d be willing to kill the daughter of the woman he loves?

Helping Emily dispose of Gordon’s body is her fellow Takeda student, Aiden (Barry Sloane), who was the one who suddenly burst in and shot Gordon last week. Aiden and Emily have a relationship secret of their own. Back in the day when they were training to become masters of revenge with Takeda, the two got pretty intimate. They were going to leave together to save his sister (which probably has to do with his own revenge story), but when Emily arrived at their rendezvous, she discovered he had left without her. Takeda lectured her on the mistake of trusting and opening her heart to anyone. And now we understand a little more why she has the giant glacier around her heart. 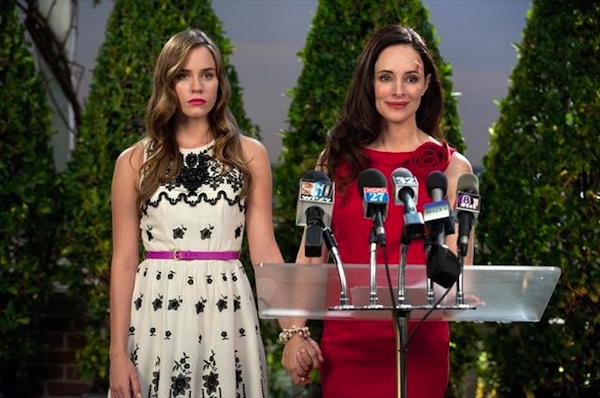 Across the street, The Graysons are existing in a living hell together since Victoria (Madeleine Stowe) has everyone on lockdown until she can have a press conference. Emily guilt-trips Amanda to go to the press conference to deliver her version of David Clarke’s journal. Even though she knows fraternizing with the Graysons could ruin her relationship with Jack, she decides to go for Emily.

Charlotte reads the journal and explodes on her mother. Apparently, the journal reveals some nasty things Victoria did to David. At the same time, Daniel (Joshua Bowman) receives Victoria’s fake passport and realizes his mother faked her own kidnapping and was ready to skip town.

Despite World War III breaking out in the family room, Victoria goes through with her press conference and uses the opportunity to reveal secrets before anyone else has a chance to. She announces that Charlotte is the result of her affair with David Clarke and then publicly welcomes Amanda and her unborn baby into the family.

Unfortunately for Amanda, Jack sees the charade on TV and decides he has had enough of her lies. He politely tells her he understands why she wants to be a part of a family, but delivers a harsh blow by saying, “I’m committed to our child, I just don’t think I can commit to you.” Doing favors for Emily certainly comes with a high price. I can’t help but think Emily is going to pay for this one.

Exes are the worst. Check out this clip of Emily enacting some revenge on ex, Aiden. Don’t you feel like doing that sometimes?