Collins has been a mainstay on TV since the 1960s, and this morning, he passed away at the age of 74. 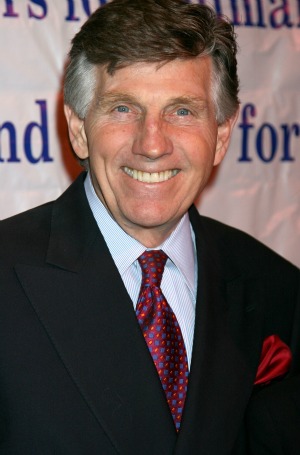 Collins appeared in numerous successful TV shows, both as an actor and a host, including Fantasy Island, Charlie’s Angels, Alice, The Love Boat, The Bionic Woman and many other shows and movies. His career ranged from the 1960s until just a few years ago. He most recently appeared in an episode of Dirty Sexy Money, in 2009. He hosted the talk show Hour Magazine from 1980 to 1988. He also hosted the Miss America Pageant from 1985 to 1989, and he played the host of the “Miss American Miss” pageant in the movie Beautiful, in 2000. Collins was also the star of The Sixth Sense in the 1970s and a cast member of The Wackiest Ship in the Army in the 1960s.

Collins married actress and former Miss America Mary Ann Mobley in 1967, and separated from her only last year. Mobley also appeared on numerous episodes of Fantasy Island from 1978 to 1984 and The Love Boat from 1978 to 1985.

According to the Internet Movie Database, Collins and Mobley were involved in numerous charitable causes, including the March of Dimes and the National Foundation for Ileitis and Colitis. They also helped out with numerous organizations involved in ending world hunger.

Collins shocked the world last year when he announced he would be separating from his wife of 34 years. He made news in other ways over the last couple years as well. In 2009, he was arrested after being pulled over for “driving erratically” in his motor home; he was then charged with driving under the influence. According to TMZ, he blew a .29 on a Breathalyzer, almost four times the legal limit.

Coroner Switzer said the cause of death was natural causes. Collins leaves behind three children, one with Mobley and two from a previous marriage.