Ke$ha has helped mark a milestone for the magazine, becoming the first live, solo, white woman on the cover of Vibe. 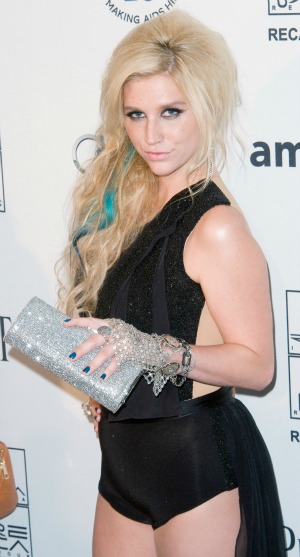 Vibe magazine hit an important milestone this month, but so did pop singer Ke$ha. In this month’s issue, she appears on the cover, something that has never happened before.

“Eminem and his 8 Mile cast reunited to celebrate the film’s 10th anniversary with a feature in Vibe‘s October/November issue,” said MTV, “but the historic double issue also includes a feature with Ke$ha, making her the first white female artist to land a solo cover on the magazine.”

Actually, Amy Winehouse did appear on the cover back in 2011, but it was posthumously. And Gwen Stefani appeared on the magazine back in 2005 but with Pharrell Williams. In true Ke$ha fashion, the singer appears on the cover in a see-through black lace dress, grabbing her… well, better parts. In the magazine, she spoke about her music and how far she has come since the beginning (two years ago).

“The first record was a celebration of partying and being young, but this record’s a better look at my personality,” she told Vibe, via MTV.

When asked about her party image, she doesn’t seem to mind the criticism: “Whatever, I drink like a champion. But I can also do other stuff. I have a sense of humor about my lyrics. I’m not a train wreck, I’m just having fun.”

After the first record, the singer said she had many critics, and they helped her figure out who she is, as a person and as an artist.

“I did some soul-searching, and realized nothing I’m doing is negative, it’s actually super positive,” she said. “You can change people’s mood in a three-and-a-half minute song. So why not spread positive energy and be funny? Let [the haters] be miserable.”

While appearing on the magazine marks an important milestone, both for Ke$ha and Vibe, it’s not too surprising. Many in the industry have been talking about her rapping skills.

Ke$ha’s new album, Cannibal, is scheduled to be released on Nov. 30.