The Bachelor franchise can put this news in the “win” category, as one of its successful couples announce they have a baby on board.

This week, The Bachelor franchise officially evened the score of breakups versus marriages and babies. Yesterday, Season 13 contestant Jason Mesnick and his now-wife, Molly, announced that they are expecting a baby in March 2013. 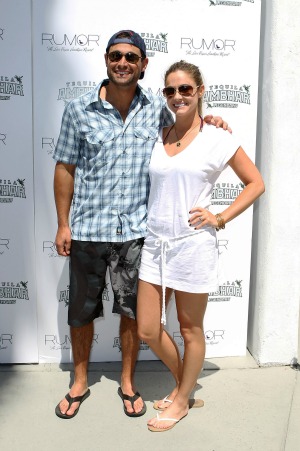 This exciting addition to their family comes on the heels of the breakup news of Season 16 couple Ben Flajnik and Courtney Robertson and the rumored trouble between The Bachelorette Season 8 couple Emily Maynard and Jef Holm. The bad news has been cushioned by some good news, though. Besides the Mesnick pregnancy news, it was announced earlier this month that The Bachelorette Season 7 couple, Ashley Hebert and J.P. Rosenbaum, will be married on a TV special later this year.

The new addition to the Mesnick family will be the second chilld for dad, Jason. He has a 7-year-old son, Ty,  from his first marriage. Ty played a significant role in his dad’s Bachelor season. This will be the first child for Molly. The dad-to-be tweeted his excitement yesterday with, “Yes its true! WAHOOOOOOO!!! Molly is going to be a MOM and TY a BIG BROTHER! YIPPEEEEEEE!”

The couple had a pretty rocky start to their relationship when Jason chose Melissa Rycroft as his fiancee in the final episode. Their relationship was rocky at best when they tried to make a go of it while in hiding as their season aired. Once the show ended, they appeared on the After The Final Rose special, where Mesnick essentially dumped Rycroft on the air, saying he had chosen the wrong woman.

It was an awkward TV moment as Molly was brought back and asked by Jason to try to reignite their relationship. She agreed to give him a shot, and the two became engaged in New Zealand, where their original Bachelor story had ended. They married on TV in February 2010.

Don’t cry for the dumped Rycroft, though. She hooked up with a former flame, Tye Strickland, and married him in December 2009. The couple now have a 20-month-old girl, Ava Grace, and they are living in Los Angeles while she performs on ABC-TV’s Dancing With The Stars: All-Stars.