Jennifer Aniston’s engagement ring is huge, right? We assumed it was worth a lot of cash, but we never expected it to cost this much. 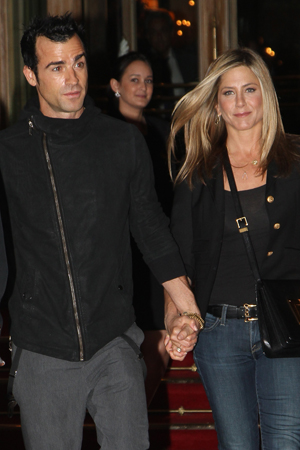 Jennifer Aniston is one lucky girl. The actress — now engaged to her Wanderlust co-star Justin Theroux — finally showed off her huge engagement ring earlier this week. Initial reports listed the ring as being worth $500K. However, one prominent jeweler thinks it’s worth about twice that amount.

“If this is a fine-quality diamond of at least 10 carats, which it looks to be from initial photos, we could be talking about a million-dollar ring here,” Anthony Sarkissian of Premier Jewelry Lenders in Beverly Hills told SheKnows.

Whoa. That’s a lot of cash to carry around on a daily basis.

Is Jennifer Aniston looking for a pre-nup from Justin Theroux? >>

“Keep in mind that 10-carat-and-over diamonds command a premium price in the diamond industry, because they are just more rare than smaller diamonds. The ring looks to be a cushion-cut or oval-shape diamond, mounted in a classic halo design. It may have Micro-Pave diamonds around the center stone as well,” Sarkissian added.?

Jen Aniston shows off her “preggo” belly in Smartwater spot >>

As for the color, we like that Aniston didn’t go for the traditional diamond look, instead opting for a yellow diamond.

“This is a popular trend in Europe right now, but we are just starting to catch on in the States,” Sarkissian added. “We will definitely be seeing a lot more of the yellow-gold style in the world of engagement rings, especially with Aniston setting the trend.”

We know what you’re wondering: How can Theroux afford such a ring? Aniston must have ponied up the cash for her own engagement band, right?

Not necessarily. Theroux does pretty well for himself; he might not be a recognizable actor, but he wrote the screenplays for Rock of Ages, Tropic Thunder and the upcoming Zoolander 2. Believe it or not, writing can be pretty lucrative — and Aniston’s getting the rewards of his riches.

Would you ever wear a $1M engagement or wedding ring?