Octomom Nadya Suleman has been accused of allowing neglect and abuse to go on inside her home. The mother of 14 claims her nannies are full of lies — and it seems the courts agree. 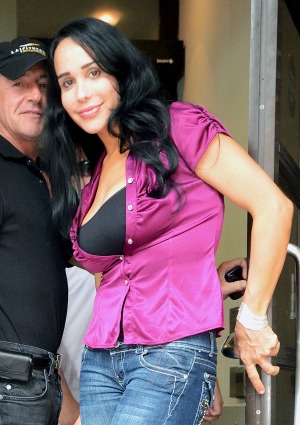 Octomom Nadya Suleman is either guilty of allowing her children to abuse one another, or her nannies are plotting, scheming and lying. The mother of 14 has responded to the “blatant lies” told to police by her former help, insisting her octuplets and other children are all well cared for.

Two nannies previously employed by Nadya Suleman have alleged both neglect and sexual abuse (committed by one child against another). In response, a rep for the woman dubbed ‘Octomom’ spoke out to E! News on Friday.

Referring to one of the accusers, the rep said, “This is a woman who became obsessed with the children and contacted [Suleman’s representatives] to help her write a book. Her and the other woman claiming to be a nanny are also good friends with each other and are trying to make money. This is why Nadya chose to move far away.”

According to the rep, the woman apparently “became enraged when Nadya moved to Palmdale and would not allow her to watch the children, because she was trying to force Nadya to give her the children.”

Among the pair’s accusations are reports that Nadya Suleman tied her newborns to their beds, locked the children inside a room so they wouldn’t bother her while she napped, and allowed the older kids to abuse the younger kids.

However, the nannies seem to have little evidence to support their claims. The Associated Press reported late Friday that police in La Habra have investigated the claims and have turned their findings over to prosecutors. Susan Kang Schroeder, chief of staff at the Orange County district attorney’s office, said there is not enough evidence to move forward with the case.

Do you believe Octomom Nadya Suleman is innocent?