Christina Applegate is hosting SNL this week. Since Applegate can do no wrong, it’s sure to be a great episode and, hopefully, breathe some life back into the show. 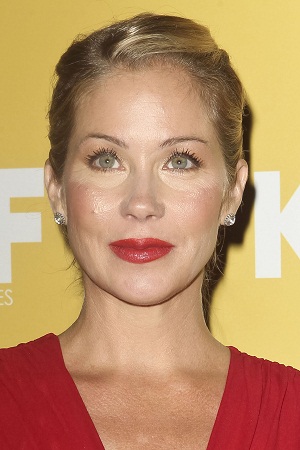 Christina Applegate returns to SNL this Saturday and we’re more than a little stoked.

She’s no doubt stepping back onto the stage in order to promote the second season of her parenting comedy, Up All Night. Don’t expect the beautiful actress to fall flat, though. Applegate also hosted back in 1993, halfway through her six-year stint on Married with Children. She’s also quite the comedienne, nailing great roles in movies like Anchorman, Going the Distance and Hall Pass.

Speaking of Hall Pass and Going the Distance, despite last season’s rumors of his departure, her former co-star in those films, Jason Sudeikis, is sticking it out on SNL for a little longer. Sudeikis is SNL‘s go-to guy for impersonations of Mitt Romney and Joe Biden. That makes him a much-needed member of the cast, at least through January. Since Americans sat through the vice presidential debate this week, you can expect to see Sudeikis as Joe Biden at least once on Saturday’s episode.

Another reason for tuning in this weekend: Saturday’s musical guest is Passion Pit. The electro-pop band from Massachusetts released a new album, Gossamer, earlier in the summer that’s doing well on the charts. Get ready for two songs of dance-inducing noise.

While the musical acts have (almost) always been great, in recent years SNL has had a rough time living up to the glories of past seasons. Fans of the show seem to ignore the fact that for every hundred thousand humans in the world, there may only be one truly hysterical person. When you consider that vintage episodes of Saturday Night Live feature hardcore gut-busters like Chevy Chase, Steve Martin and Will Ferrell, the comparison hardly seems fair. Can anyone live up to those guys?

Recent cast members like Tina Fey and Seth Meyers have certainly come the closest. But, as the newest season and fresh crop of comedians kicks into the swing of things, there’s hope that a new version of the glory days may soon be in the works.

With hosts like Applegate and the constant cameos from former SNL greats, they seem well on their way.