Ellie Goulding proves to be an eclectic powerhouse with her latest single and album, “Halcyon.” 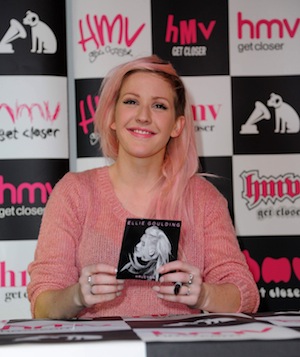 Eclectic. That’s the one word that can seemingly attempt to define the talent of Ellie Goulding. Eerie folk-pop vocals, supplemented with a soothing guitar make for this delicate song. Highlighting the angelically sweet and almost helium-infused nature of Ellie’s tone, we actually get to see some range and dimension.

Rolling Stone wrote about how this talented young artist performed at Prince William‘s wedding. By default, I dub her royalty for merely acquiring that gig. That isn’t the only prestigious affiliation this blonde has. Her beau, Skrillex, the dubstep/electro-house force that has swept the nation by storm, has also been proposed as influencing the future of her music.

In an interview with Dean Piper’s World, as mentioned in a TIME article, Ellie describes her sound in this song and album as “… going to be even more emotional — I’m all about emo.” She also indicated that her overall message is that there is “hope.” This song, almost fairylike, is the name of her album — and if you, like me, were wondering what the heck “Halcyon” means, it is a period of time from the past that was happy or peaceful.

The song starts off calmly, builds, and then fades as with any typical song. However, it began like a Trespasser’s William or Oh Land song with a standard guitar, subtle pianolike drop beats, and Ellie speaking-singing. Then it picks up, similar to “Lights” or “Starry Eyed,” and the chorus seemingly explodes with Goulding then repeating “it’s going to be better” and cooing.

While I couldn’t ever expect Ellie to have the inspirational lyrics or range like my favorite brit Adele (it would be like comparing apples to oranges), her message is clear: the past can repeat itself and you can be happy again. Her innocent, almost childlike voice is as delicate as porcelain, and that in and of itself is soothing. Go on, unwind and press play.