Helen Hunt as a sex surrogate? Yep! The Academy Award–winning actress strips down in The Sessions to help a disabled author get in touch with his sexual side… literally. 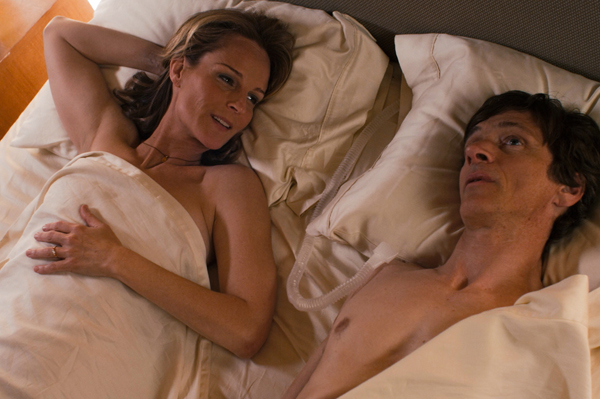 Can a story about a 38-year-old virgin and his paid sex partner be a gentle, dare-we-say-romantic story? Absolutely, especially when it stars Helen Hunt and John Hawkes as that pair. Based on a true story, The Sessions focuses on the life of Berkeley author Mark O’Brien. O’Brien — stricken with polio as a youngster — wants to make use of one of the only body parts he can control.

The problem? He doesn’t know how to go about it. Enter Cheryl Cohen Green, a sex surrogate he hires to help him do the deed and discover the finer side of life.

The Sessions, naturally, contains a lot of nudity. Both Hunt and Hawkes had to go “all the way” with the nudity and sex, so to speak — and she was more than ready.

“Any hesitation I had about the nudity, I think what I thought was it’s getting late. You know what I mean?” the Oscar-winning actress told IndieWire. “It’s getting too late in my life to care about the small things. It’s getting too late to not be brave, to not live my life fully, to not try to be an artist. Trivial things like how nice your hotel room is, or if you have to be naked for a while, they fade away.”

The film was a critical darling at both the 2012 Sundance Film Festival and the 2012 Toronto International Film Festival. Fans and critics worried that the honest look at sex would earn the film an NC-17 rating. Luckily, it’ll have the R tag when it hits theaters later this month. Hunt couldn’t be more pleased with the rating — she’s naturally proud of the film and thinks young people can benefit from seeing a non-pornographic representation of sex on-screen.

The Sessions clip: “The wrong way to start off”

“I think they should see a movie about sex that’s not weird, or titillating, or shame ridden, or cool, or slick. Sex is just not any of those things,” she added to IndieWire. “I feel like all of us are John’s character. We’re all hoping to not be humiliated, to be treated with kindness, to be accepted, to have a voice in what we do want, what we don’t want sexually. So I think the film’s a wonderful introduction to what it’s like to have sex with another person.”

And now what you’ve all waited for… An exclusive clip from The Sessions!