Did you hear the one about Robert Pattinson cozying up to a mystery blonde in New York City? It’s been rumored the party girl in question was Sienna Miller — but while that’s close, it’s not quite correct. 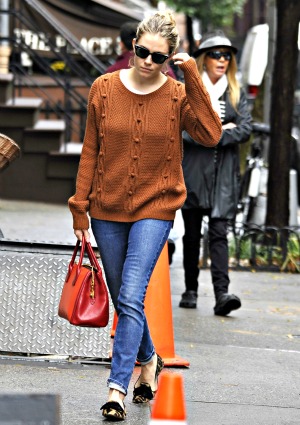 Robert Pattinson, Twilight hunk of sparkly vampire love, attracts the ladies no matter where he goes. The actor recently caught the attention of a blonde while out partying in New York City, causing many to speculate about the mystery woman’s identity.

While his maybe on-again girlfriend Kristen Stewart was in Los Angeles on Oct. 6, the 26-year-old actor was on the other side of the country at the Electric Room. After being photographed with his arm around a blonde woman, Robert Pattinson may have had some explaining to do during his daily phone call with KStew.

After much speculation about whom the fair-haired beauty could be, it’s been revealed that the lucky lady is not Sienna Miller — but her sister Savannah!

Kristen Stewart is a total see-you-next-Tuesday, she says >>

Seen here taking a stroll through the West Village in Manhattan on Oct. 10, actress Sienna is the new mom of Marlowe and is also little sister to fashion designer Savannah Miller. Though the pair began the Twenty8Twelve label together six years ago, both have recently cut ties with the brand.

Sienna and actor Tom Sturridge, father of her baby girl, are in New York to promote her new film, The Girl. The new parents, her sister and The Twilight Saga: Breaking Dawn Part 2 actor reportedly spent the evening together at the bar — trying out power tools.

A curious photo of Robert Pattinson with a power drill in hand was posted to Twitter by someone with the handle @KillaWolf1, reports Marie Claire. The caption? “Memories from last night: #RobertPattinson using #powertools NY never ceases to #surprise @ Wooster St.’ [sic]”

The rich and famous sure know how to party.

Would you rather see Robert Pattinson with Kristen Stewart or Sienna Miller’s sister?