Kristen Stewart has resorted to using a particular four-letter word to describe herself. It seems the young star, rumored to be reconciling with Robert Pattinson, just can’t find her happy place. 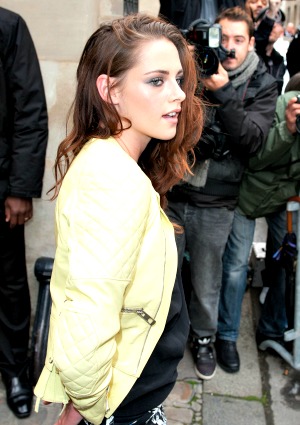 Kristen Stewart has jumped on the self-deprecating bandwagon, labeling herself a “miserable c**t” during an interview abroad. In a quote heard round the world, the Twilight star explains why it’s just so darn hard to be happy.

Speaking to Marie Claire UK for their November issue, Kristen Stewart proclaimed, “I’m a miserable c***! I’m not sure if I’m most happy when I’m comfortable and content or when I’m pushing myself to the limits. There are such different versions of happy. And I really appreciate both.”

KStew was also, at least for a time, not sure if she was most happy with Robert Pattinson by her side, or trying out the arms of others.

Though rumor has it the Twilight lovebirds are rekindling their troubled romance, others assert the making up isn’t going so well. All we know for sure is that KStew and RPatz are going to be seen in public together come mid-October for the promotion of The Twilight Saga: Breaking Dawn Part 2.

Jules Stewart is trying to reunite her daughter and Robert Pattinson >>

Speaking of Bella Swan, Kristen Stewart shared with Marie Claire, “I always wanted Bella to be unassuming, yet cooler than everyone else. We both wear lots of casual clothes. But her actual style is very far away from mine.”

Also a far cry from the 22-year-old’s wardrobe was her apparel as a stripper in 2010’s Welcome to the Rileys. “I was definitely not wearing enough clothing,” she admitted. “I looked back and thought ‘That’s so not me,’ but it was fun.”

What do you think of Kristen Stewarts self-description?