The country music group is not only big with the fans, they’re big with critics as they earn three nomination for the ACAs. 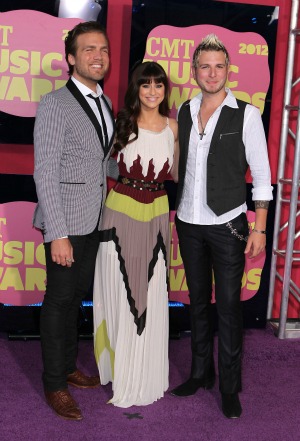 The third annual American Country Award nominations were announced yesterday and it’s good news for the up-and-coming trio Gloriana. They were nominated in three categories including Breakthrough Artist of the Year, Single of the Year: Breakthrough Artist “(Kissed You) Good Night,” and Music Video: Group or Collaboration “(Kissed You) Good Night.”

The group was ecstatic to hear the news and said, “We couldn’t be more honored and excited to receive these ACA nominations. It’s been a truly incredible year for us as a band with releasing our second album and then to watch the support and excitement that ‘(Kissed You) Good Night’ has received is just amazing.”

The lyrics to the song have resonated with Gloriana’s fans because of its sultry words of longing over a goodnight kiss. The music group has received comments like “i wish i had a girlfriend to sing this to,” and “This happened to me:-) I am glad i went back and kissed her goodnight,” on their official YouTube page. It sounds like there’s going to be a lot of romance going on anytime Gloriana’s song is played.

The polls are now open through Nov. 12 for fans to vote once a day for their favorite artists or songs in each category. The nominations were selected from four different media companies that measure particular aspects of the music business: touring data, radio airplay, video airplay and record sales/media consumption.

Gloriana’s single “(Kissed You) Good Night” went Gold this year and hit the Top 5 on the Billboard Country Singles Chart. The group is touring the U.S. to support their sophomore studio album, A Thousand Miles Left Behind. The album was critically acclaimed and their latest single, “Can’t Shake You,” is currently making a splash on the country charts.

The American Country Awards will air on Monday, Dec. 10 on FOX, live from Mandalay Bay in Las Vegas. For more information on Gloriana, check out their website.