Bobbi Kristina Brown is engaged to a guy she was raised with as her brother — and her engagement ring looks royally familiar. Is it from her mom’s jewelry box? 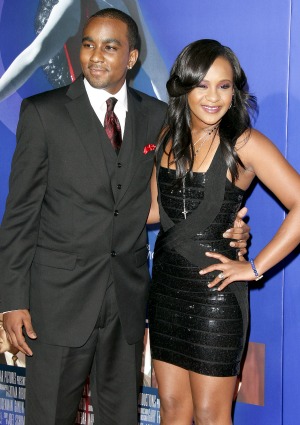 After months of speculation, it appears we’re about to get an answer to the rumor that the daughter of Whitney Houston and Bobby Brown is engaged — and the answer is yes!

In a special sneak peek at Bobbi Kristina Brown‘s reality show The Houstons: On Our Own obtained by E!, the 19-year-old is seen announcing to her somewhat disapproving family, “We’re engaged!”

Was Bobbi Kristina in a major car accident? >>

Brown’s betrothed, Nick Gordon, was taken into the Houston household ten years ago when his own mother could no longer care for him, and he and Bobbi were practically raised as siblings — although Whitney never formally adopted him.

Rumors of an engagement have been swirling since last March, when Bobbi posted on Twitter a photo of herself wearing a huge diamond ring. In the reality show clip, she is sporting a sapphire-and-diamond bauble that is a dead ringer for Kate Middleton’s famous sparkler.

“Nick proposed to Krissy on March 10, and she said yes,” a family friend told Star magazine. “Krissy said Nick is the only person she trusts in the world. They have a very deep connection.”

Back then, Gordon denied the rumors, telling ABC News, “We’re just close — just going through her mom’s passing and grieving together.”

A rep for the teen said that Bobbi was “simply wearing her mother’s ring” in the pic. Is her real engagement ring from her mom’s jewelry box too?

The Houstons: On Our Own debuts Wednesday, Oct. 24 on A&E.