Convicted child molester Jerry Sandusky and his wife are still proclaiming the former coach’s innocence — and shockingly lay the blame for his unconscionable crimes on their own son. 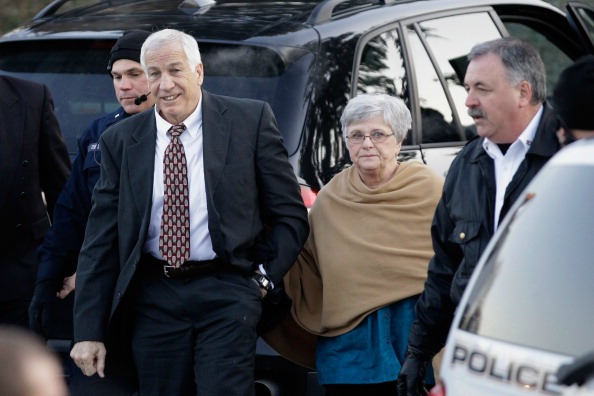 Child molester Jerry Sandusky‘s long sentence of 30 to 60 years in prison means the 68-year-old will spend the rest of his life in prison — but the former Penn State football coach is still trying to delude the public into thinking he’s innocent.

In letters to the judge, Sandusky and his wife Dottie attacked their son Matt for flipping sides. Matt, adopted as a teen, told investigators in the middle of his father’s trial that he too was molested. He did not testify.

“My trust in people, systems and fairness has diminished,” Sandusky wrote. “In my heart I know I did not do these disgusting acts. However, I didn’t tell the jury. Our son changed our plans when he switched sides.”

Dottie ripped her son apart in her letter, accusing Matt of being mentally ill criminal who is off his meds.

“People need to know what kind of person he is. We have forgiven him many times for all he has done to our family, thinking that he was changing his life, but he would always go back to his stealing and lies,” she wrote.

“He has been diagnose [sic] Bipolar, but he refuses to take his medicine.”

The Sanduskys adopted Matt when he was 18 after an arrest in a bid to help him avoid going to a juvenile detention facility.

“[Matt] has had many run-ins with the law and stolen money and items from our family,” Dottie wrote. “We still love him and want the best for him, but because of his actions we cannot express this to him.”

“I use [sic] to believe in our protective system, but now have no faith in the police or legal system. To think that they can lie and get by with the lies. The press has been unbelievable. People who have not met us are writing untruths.”

The judge in the case indicated that while he received letters from others, the missives from the Sanduskys were the only ones he considered when handing down his 30- to 60-year sentence. The coach sealed his own fate with his blame game.