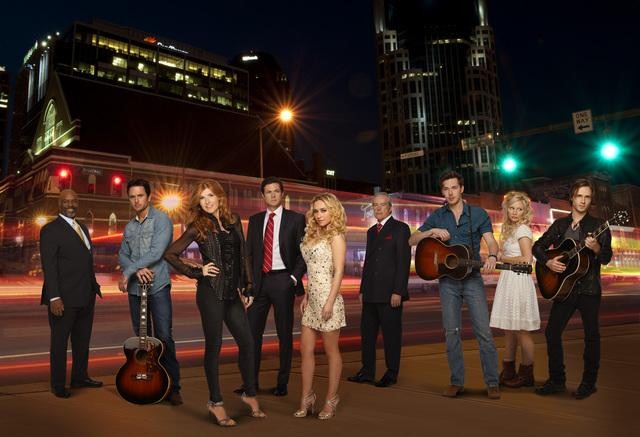 Think country music is a bunch of gentle rednecks singing about pickup trucks, dogs and lost love? Think again: The new ABC drama Nashville shows us that things down on Music Row aren’t exactly so innocent.

Nashville centers on Rayna James (Connie Britton), an aging country superstar — and dead ringer for Faith Hill — who isn’t ready to let the spotlight go just yet. Suddenly she’s feeling the squeeze from her record label about her upcoming tour: It’s not selling well, and won’t she please go on a co-headlining tour with up-and-coming superstar Juliette Barnes (a deliciously b****y Hayden Panettiere)?

Of course not. Rayna’s the superstar, and she’s not about to share the bill with a young pop tart. However, money is tight at home — thanks to some bad “business deals” hubby Teddy Conrad (Eric Close) got into — and she wants to find a way to keep her career afloat for both the money and the fame.

That’s Nashville in a nutshell, but let’s back up and go through the episode piece by piece.

A falling (and rising) star

We’re immediately introduced to Rayna as she’s rushing to get ready for a performance at the Grand Ole Opry honoring her pal and mentor, Watty White. The kids don’t want her to leave because “aren’t we rich?” House daddy Teddy tells them that yes, they’re rich, but they’re cash poor — meaning they need the money to keep their huge Nashville mansion off the foreclosure block.

Rayna does her typical (we’re assuming) performance and goes backstage. That’s when things start to get interesting. We’re introduced to her bandleader, Deacon Claybourne (Charles Esten), who immediately seems a bit too close to the superstar. More on that in a minute.

Cut to Juliette’s dressing room. She’s like what we’d imagine would happen if Taylor Swift had a kid with a Las Vegas stripper: Trashy, way too confident — and not about to let anyone stand in her way. She’s busy getting frosted lip gloss applied to her pillowy lips when her shrinking assistant answers her phone.

Oh god, it’s Juliette’s white-trash mother. Something tells us she doesn’t want to talk to her mama — maybe because she throws the phone across the room and barks at her flack to change her number again. Her handler swoops in and saves the day, telling her she needs to play nice and meet the superstar. Juliette has a commanding presence as she walks down the hall in her two-sizes-too-small mini. That is, until she meets Deacon. Juliette fawns all over the guitarist and tells him how much she loves him. Embarrassed, she backs away, and her handler switches her dial back to b***h.

Eventually, she’s led into Rayna’s dressing room, where she tells the superstar that her mama used to “listen to your songs when I was in her belly.” Rayna then quips about Juliette’s compressed boobage, and a mutual hatred is formed.

Then comes the bad news: Record label suits tell Rayna she has to bow down to Juliette for a tour or risk losing her deal (we’re guessing). Cue dramatic music and remote throwing.

Next, we meet Rayna’s dad, Lamar Wyatt. He’s a tycoon of some kind, and his charming demeanor (he berates his daughter for being late to an event honoring him) and huge veneers tell us he’s really evil. Rayna tells her sister/dad-slave to never make her come to one of these events again.

Of course, Juliette Barnes is weighing heavily on her mind. Juliette, meanwhile, is across town recording a song while eyef*****g the drooling producer Randy (Burgess Jenkins). Basically, she’s terrible at her job, but who needs talent when you’re blond?

“Thank God for autotune,” the uninterested record guy quips in the background.

Rayna is still freaking out over Juliette while taking her daughters to school. Juliette’s song comes on, and — to Rayna’s horror — the girls sing along. Mommy Dearest turns off the radio ’cause no one is playing that crap in her SUV. Later that night she tells hubby Teddy about the problem, and he advises her to walk away — he can support them. She LOLs and is like “Uh, you don’t have a job,” and he’s like “I can get some dealz,” and then advises her to take money from Daddy Warbucks. She’s not having that because they don’t get along and he’s evil.

She then rushes off to producer Randy’s bachelor pad to talk to him about her record, but really all she wants to do is talk smack about Juliette. Too bad he just got done sexing the young songstress and she can hear everything. Cut to her lying sexily on the bed formulating an evil plot. Dun dun dun.

We later see Deacon performing an emotional song at Nashville mainstay The Bluebird Café as Scarlett delivers beers and Juliette fangirls in the audience. After the performance, Scarlett’s gross boyfriend asks Deacon about his demos, and Deacon’s like “You suck.” Deacon does like adorable bartender Gunnar (Sam Palladio) — he tells the young singer that he’s on his way to the top and won’t he please take Scarlett away from that awful Avery?

Outside, Juliette approaches Deacon and basically wants to have sex with him right there. She mentions stuff about ditching Rayna and being her bandleader and songwriting partner. Deacon’s visibly scared of her, but the psychopath will eventually get what she wants.

Cut to Rayna’s tour rehearsals. They aren’t going so well, and she has a “diva dip” moment — whatever that means — and goes on a bridge walk with Deacon. Turns out they used to have sex all the time and every song Deacon writes is about her. He tells her about Juliette’s indecent proposal and she claims to not want to hold him back, but she’ll definitely push him into the river if he works with her archenemy.

On the other side of town, Lamar is busy formulating a plot to plant someone in the mayor’s office. You know, so he can help the town — or get his deals pushed through whenever he wants. Who better to make his puppet than Rayna’s unemployed husband Teddy? He doesn’t have anything better to do, after all. They approach him at dinner, and he’s like “I won’t be your slave!” and Lamar recites some cryptic quote and he’s in. Too bad Rayna’s pal Coleman (Robert Wisdom) is already running for mayor and she promised to perform songs at his announcement. This is awkward.

At home, Teddy tells her he’s tired of being her +1 and wants his own time in the spotlight and won’t she please, please, please let him run for mayor? Then he says, “I know I wasn’t your first choice, I know you settled for me,” basically telling us that all she ever really wanted was to be Mrs. Deacon Claybourne.

Come to find out that Deacon is probably the father of Rayna’s oldest child. It’s obviously a secret, but Daddy threatens to tell Teddy about it if Rayna doesn’t go along with the deal.

Oh, and at one point we see a crying Juliette in a janitor’s closet talk to her mom. Turns out Mom’s on bath salts or meth or something and just wants $50. Juliette won’t give it to her, and now we know why she’s so evil and driven. Producer Randy comes in to find her, and they start making out.

It’s finally Monday, and Rayna has her meeting with the record label. New boss tells her that he certainly cares about her, but her nine Grammys don’t pay the light bill around here. What does pay the bills? Juliette’s T&A. Rayna isn’t having that, so she does her best cowgirl strut out of the office. What will happen to her career now?

Speaking of Juliette’s T&A, producer Randy comes to her house because he obviously thinks they’re dating. She’s not happy to see him and slams the door in his face. Why? Deacon’s there and they’re “writing music.” Uh, oh.

Cue Scarlett and Gunnar in The Bluebird Café.

The destined lovers already shared a tender moment when Gunnar put her poems to music. Now, he convinces her to take the stage on open-mike night. Scarlett’s apprehensive, but they sing her song about “damnits” and “dos” and are basically amazing as a twosome. Right then Watty White walks in and has an idea. He calls Rayna and has her listen to the performance. Can she hear it? We can’t tell if the look on her face is awe or basically a response to hearing nothing. Watty tells her about said idea and says he’ll call her later. She says OK and walks out on stage as a nice political wife.