Maynard and Holm are still acting happy and appearing in public together, but there is talk that all is not well. Will we be hearing the news of a breakup soon? 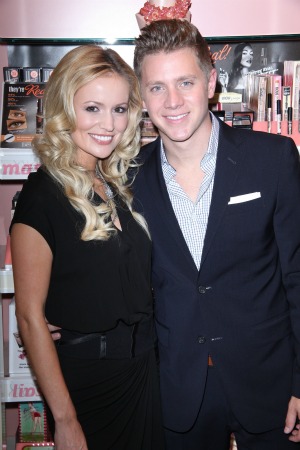 The Bachelor/Bachelorette TV franchise has not always led to true love, and it looks like another couple may have bitten the dust. Reality Steve is reporting that Bachelorette couple Emily Maynard and Jef Holm have officially called it quits.

But no one else has reported the split, and the couple definitely hasn’t said anything. But the gossip columnist is right more often than not, so it could be true.

“It’s… what I feel comfortable in reporting based on what was told to me. Yes, I know, I know. I can hear your questions already coming. ‘If they broke up, why did they go to the Panthers game together?’ ‘If they broke up, why is each still following each other on Twitter?’ ‘If they broke up, why is each default Twitter picture a picture of them together?’ All legitimate questions,” he said. “And here’s what I can tell you: It just happened a couple days ago. This isn’t a rumor, I didn’t hear this 5th hand, and I’m not making something up for attention. All I’m here to tell you is that Jef and Emily are no longer an engaged couple and have broken up.”

Reality Steve also reported that the couple is currently in the process of trying to figure out how to announce the news, and so an announcement will be coming very soon. And a breakup wouldn’t be the first in the reality TV franchise’s history. Actually, just a few days ago, Courtney and Ben announced they had split as well, after about a year together. It goes to show all contestants on the show that there is no such thing as a normal breakup, even after the cameras are gone. It takes a statement and some finesse to announce the news, and maybe even some faking it in the meantime.