The former VP candidate is now just another celebrity, but she is holding onto her fame any way she can. Sarah Palin recently announced she and her family are writing a fitness book. 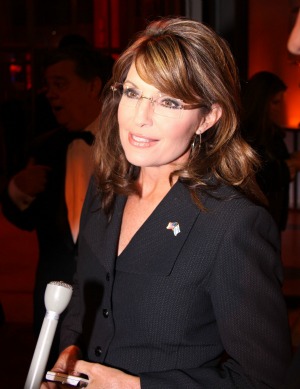 Sarah Palin has apparently become just another celebrity. The former vice-presidential candidate was photographed out in LA recently, but more shocking than her new image is her weight. Many have been speculating about why she’s so skinny now, but it looks like there is a good reason for it. Palin recently told People magazine in an email that she is in the middle of writing a fitness book. Or rather, the Palins are writing a fitness book.

“Our family is writing a book on fitness and self-discipline, focusing on where we get our energy and balance as we still eat our beloved, homemade comfort foods!” she told the magazine.

The 48-year-old’s new discipline can’t be easy since the family has been known to serve guests numerous treats, but by the looks of her, she is taking it seriously.

“Palin, who famously made moose chili and moose cheese dogs during a 2008 interview, promised a book that’s ‘unique and motivating,'” said ABC News.

“We promise you what we do works and allows a fulfilling quality of life and sustenance anyone can enjoy,” she told People. Palin did not say whether she has shopped the book around yet, or when it might be out.

Since the 2008 election, Palin quit her job as Alaska’s governor and starred in her own reality TV show, Sarah Palin’s Alaska. But it’s not clear what else she has been up to. She had many supporters who wanted her to run for president of the United States in 2012, but in October 2011, she announced that she would not be running.

So, “Sarah Palin is now nothing but a celebrity…. [She has] transformed from a political figure to a popular one,” said Hollywood.com.

Palin’s daughter Bristol is currently in the middle of her second season of Dancing with the Stars, and Sarah has been in the crowd a few times to cheer on her daughter.