Drew Lachey’s Dancing with the Stars spin has come to an abrupt end. While his partner believes they were robbed, the toe-tapping singer finds something about their elimination a wee bit ironic. 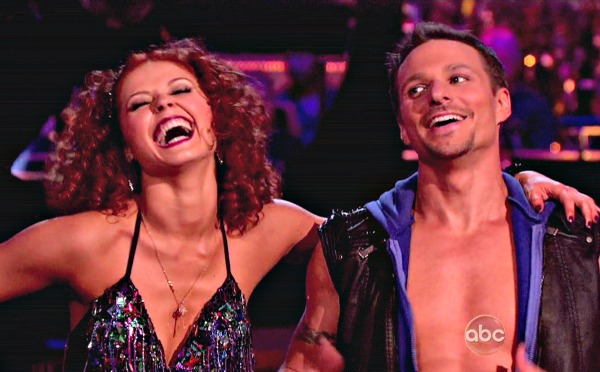 Drew Lachey has managed to find the faintest bit of humor in his Dancing with the Stars elimination. What could be funny about the hard work with partner Anna Trebunskaya being all for naught? It’s the lack of seasoned performers left on the floor, apparently.

“I feel disappointed that it came to an end,” Drew Lachey told reporters backstage, shortly after being cut Tuesday night. “There are fantastic dancers on the show. Everyone knows it, and everyone sees it every week. [But] do I think we’re going home too early? Absolutely. I don’t think there’s anybody in this ballroom who would disagree with that.”

Less shy about her true feelings, Anna Trebunskaya vented, “Oh, my gosh, I was so robbed! Are you kidding me? I have an amazing partner. We had so much fun together. I feel robbed of having the fun of working with this person.”

With Drew Lachey off the show, there’s something the remaining contestants happen to be missing that hasn’t escaped the 98 Degrees singer’s notice — a lack of experience on a big stage.

“I take pride in what I do, and to me, it’s kind of ironic that the two Broadway performers — me and Joey [Fatone] — are gone already,” Lachey explained. “It’s a little odd to me, but that’s part of the unpredictability of the show. It sucks. It really sucks.”

Do you think it was time for Drew Lachey’s Dancing with the Stars run to end?