When Dr. Yams saves Mayor Bloomberg’s dog, Nasdaq, he earns some serious press. Will George get jealous? Probably. But isn’t that inevitable? 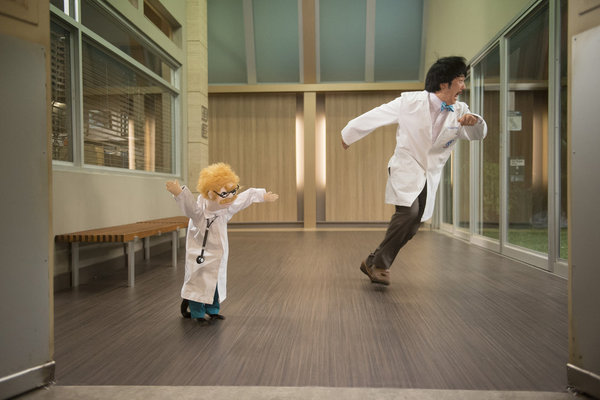 NBC’s Animal Practice may seem like just another sitcom, and maybe it is. However, the situation is the most unique on television and the comedy is actually pretty funny, too.

Sure, it’s immediately obvious what will happen when Dr. Rizzo curls up inside Dr. Rick, the puppet: things will end hysterically badly for the puppet-fearing Dr. Yamamoto. But when the emotionally unavailable and humanity-inept chief of surgery, Dr. George Coleman (Justin Kirk), loses a kid in the episode “Clean-Smelling Pirate,” he carefully suggests, “Maybe we could coax him out with some sort of ‘child biscuit.’” How does that not make you snort?

George is a whiz at dealing with animals, but is absolutely clueless when it comes to humans. He’s awkward and insensitive in nearly every interaction with another person.

The recipe for comedy continues. Animal Practice also includes Dr. Doug Jackson, the vet with a banjo on his office wall and the owner of Dr. Rick, and Angela, a prisoner-dating, weird-as-hell nurse. Add in Dorothy Rutledge (JoAnna Garcia Swisher), the well-meaning but slightly ditzy girl who keeps everyone in line, and more giggles ensue.

Added bonus: Dorothy and George have a history and, from time to time, it seems inevitable that they’ll end up together again. 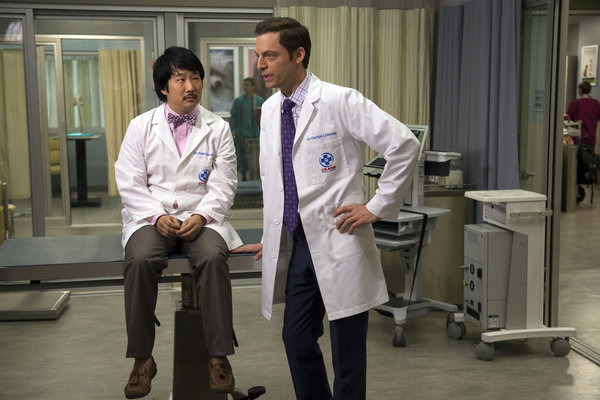 In the newest episode, “Dr. Yamamazing,” Yams saves the life of NYC Mayor Bloomberg’s dog, Nasdaq. George finds out about the event in the elevator when Dr. Rizzo (dressed in a suit and tie that match George’s) shows him the front page of the paper. It’s a full-color picture of Yams and Nasdaq. As Yams lives it up in the limelight, the ever-scowling George balks at the fame given to a vet he considers inferior to himself. And with a dog named Nasdaq, the word play is sure to run wild throughout episode.