Doug Hutchison may not have children, but he’s got 18-year-old wife Courtney Stodden! The creepy comparison from the 52-year-old actor came about as tempers flared during a recent episode of VH1’s Couples Therapy. 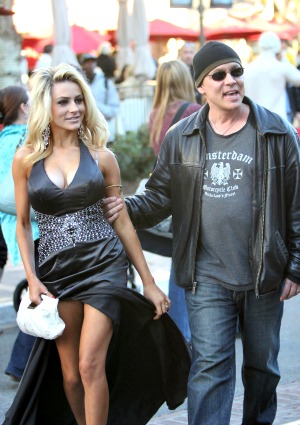 Don’t understand Doug Hutchison and Courtney Stodden‘s romance? Neither do fellow participants on VH1‘s Couples Therapy, who had the chance to tell the May-December pair their thoughts face to face.

In an exchange captured on camera, JoJo (there to work on his relationship with Tashaunda “Tiny” Hailey) called out 52-year-old Doug Hutchison, who took Courtney as his wife when she was just 16, asking repeatedly, “Do you have any kids?”

“This is my child,” he replied, referencing 18-year-old Courtney Stodden, seated next to him. “I’m raising my wife.”

Fellow participant Nick Lamas-Richie then chimed in on the conversation, labeling Courtney “the trash all over the Internet.:

Courtney Stodden: All grown up and ready for divorce >>

The insult is far from the only criticism of the curious couple’s relationship. Access Hollywood‘s Billy Bush recently had at the pair as well.

“Why get permission from her parents to marry, why not just wait two years until she’s 18?” the host inquired of his guests during an interview.

“A couple of reasons; life is unpredictable, and we need to live every day to the fullest,” Doug Hutchison offered in reply. “Courtney and I fell in love, and we’re soulmates, and we needed to dive. She’s 18 now. What would be the point to have waited until she’s 18?”

Billy Bush shot back, “The psychological development, the emotional development in people ages 51 and 16 is giantly different.”

Referencing other celebrity May-December romances, the actor retorted, “Our inspiration is people like Jon and Bo Derek. She was 15 and he was in his 40s. They had a 22-year marriage. She held his hand while he was on his deathbed.”

Turning to Courtney Stodden, who said she met Doug online through friends, the entertainment news host continued, “But you’re 16, and you’re swaying all over the place. Like I have a 14-year-old daughter who is hormonal and emotional and changes her feelings about friends every 10 seconds.”

She responded, “I wasn’t… if you asked Bo Derek, she would say the same thing. When you’re an old soul, you’re not going to fall in love with a 14-year-old boy… I was a Christian girl, and I wanted to save myself until I got married. Some people say that I waited a whole 16 years… that meant so much to me… We’re still together. We’ve been married for a year and a half, almost.”

Unconvinced, Billy Bush went on to blast Doug Hutchison, saying, “People are going to call you a pedophile and a pervert for meeting a young girl online. And they’re not far off… You threw your career away.”

Do you think Doug Hutchison and Courtney Stodden deserve such criticism?