Demi Lovato denies she is dating One Direction’s Niall Horan — or anyone else for that matter. Kind of. Does Wilmer Valderrama know about this? 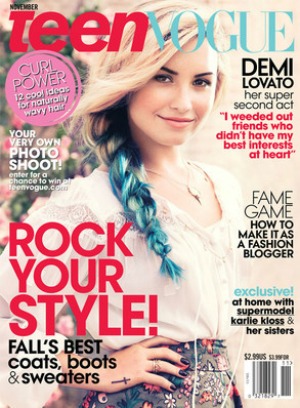 Demi Lovato‘s life is at an all-time high: She’s well into her recovery from substance abuse and eating disorder issues, she’s got a sweet new gig on The X Factor and she has a new number-one single, “Give Your Heart a Break.” What she doesn’t have is a boyfriend — or at least, she doesn’t have a boyfriend named Niall Horan.

The star denied the rumors she is dating the One Direction singer in an interview with Teen Vogue.

“He’s a really awesome, sweet guy,” Lovato told the magazine. “But he’s not my boyfriend… I’m in a place right now where I really need to focus on myself.”

“Obviously, I’m still going to like people — or love them — but I need to not be in a relationship for a while because I need to be OK with being alone, first,” she said.

Tell that to her on-again, off-again love Wilmer Valderrama. The pair was spotted getting cozy on several occasions just a month ago.

No matter. Boyfriend or no boyfriend, Lovato says she is loving life.

“I’m really happy right now,” she said. “I never thought it was possible to be happy because of how depressed I was my entire life. But I feel so incredible. It’s like living in a dream.”

Part of that dream has to do with clearing all of the Negative Nancies out of her life.

“I did kind of a friend cleanse right after rehab, where I weeded out people who didn’t have my best interests at heart,” she explained. “Now I have friends who love me for who I am and don’t care about what I’m doing. Most of them aren’t in the industry. Some of them don’t even know my songs!”

Read the complete interview with Demi Lovato on TeenVogue.com.