Bam Margera is under fire for threatening a puppy with a gun — but was it all just a really bad joke? 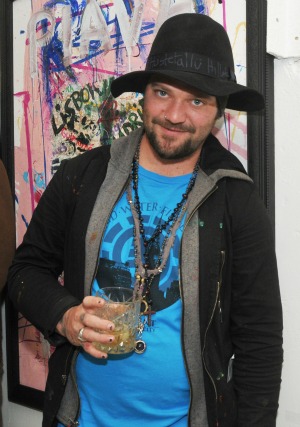 In a real Jackass move, Bam Margera threatened to shoot a puppy for pooping in his bed — but once people started freaking out he said he was just kidding.

Margera posted a photo on Twitter showing the tiny pit bull puppy with what he claims was a toy gun to its head, and a sign that read, “If she poops one more time she gets bye byes.”

The accompanying tweet read, “Penny pooped in my bed. Not too fond of that. If it happens again, Penny goes Bye Byes.”

Margera, who also has six cats, said he was just kidding around and his fans should know that.

“I feel like every follower I have on Twitter knows my Jackass joking kind of humor,” he told the Philadelphia Inquirer.

He also said that he posted several other images of himself holding the toy gun to the heads of various friends, but no one complained about those images.

Making the photo faux pas even more troubling is the fact that Chester County, Pennsylvania, where Margera resides, has seen an uptick in horrific cases of animal abuse in recent months. The comedian said that if he had known, he never would have posted the picture.

“I think those people need to go down,” he said of the abusers. “Just hurting another animal is rude, crude, and more.”

Margera said the photo was prompted by waking up in a pile of poop. “The worst part was, I was dead asleep. [It was] all over.”

Penny, since renamed Sunny, now has a crate.