Convicted child molester Jerry Sandusky has been sentenced to at least 30 years in prison — but he is still trying to manipulate the public into thinking he is not a monster. 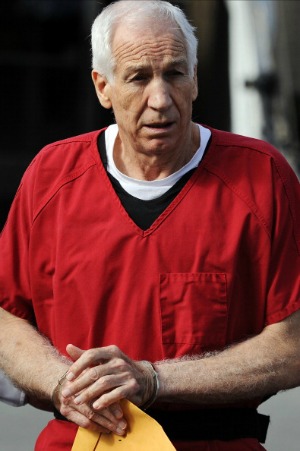 Former Penn State football coach Jerry Sandusky has been sentenced to 30 to 60 years in prison for molesting 10 boys over 15 years.

Sandusky, who was convicted on 45 counts of child sexual abuse, remained defiant and gave a rambling statement proclaiming his innocence. He released a taped statement using similar language Monday night.

He then placed the blame squarely on the shoulders of his accusers.

“A young man who is dramatic, a veteran accuser, and always sought attention, started everything,” Sandusky said. “He was joined by a well-orchestrated effort of the media, investigators, the system, Penn State, psychologists, civil attorneys and other accusers. They won. I’ve wondered what they really won: Attention, financial gain, prestige. It will all be temporary.”

“We must fight unfairness, inconsistency and dishonesty. People need to be portrayed for who they really are. We’ve not been complainers. When we couldn’t have kids, we adopted. When we didn’t have time to prepare for a trial, we still gave it our best. We will fight for another chance.”

An attorney for one of the victims said she is not surprised by Sandusky’s statement.

“Pedophiles often believe they did not do anything wrong. In their twisted universe, they helped their victims and loved them,” said Marci Hamilton.

Ben Andreozzi, attorney for another victim, added, “One thing that’s critical for victims’ healing is an acknowledgment of guilt. (Sandusky) is stunting that healing. He is either delusional or the victim of one of the most comprehensive conspiracies of mankind.”

Sandusky will begin serving his sentence immediately. The 68-year-old will not be eligible for parole for at least 30 years.