As if militia and a kidnapped brother aren’t enough to worry about, let’s throw attack dogs and a revenge-seeking crazy dude into the mix! Unfortunately for our rag-tag team of crusaders, someone won’t make it out alive. 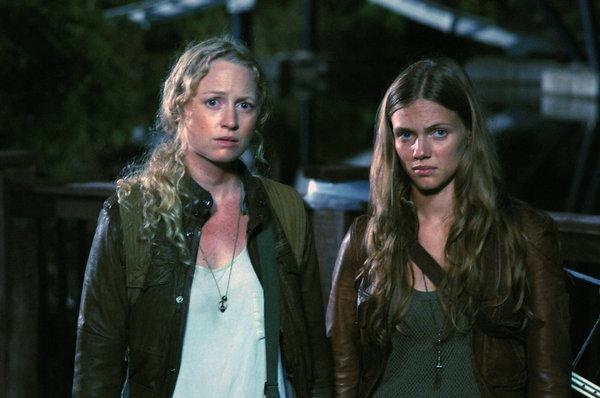 It is difficult to imagine what life would be like if we were suddenly cut off from the technology we’ve all come to depend on, but Maggie’s story certainly paints a vivid and heartbreaking picture.

Maggie (Anna Lise Phillips) remembers her last moments before the blackout when she was Skyping with her son and arguing about bedtime. Abruptly, the power turns off and she loses communication. She spends years walking from Seattle to New York and up and down the East Coast looking for a boat to take her back to England, but there’s no such luck.

Just when she decides to end it all, Ben arrives on the scene and welcomes her into his family. She credits Charlie (Tracy Spiridakos) and Danny (Graham Rogers) for saving her life. Maggie shares this story with Miles (Billy Burke), who is constantly threatening to leave Charlie because he just doesn’t have any room for feelings or relationships. He’s just done it again and this time he means it!

And now that we’ve grown to feel for Maggie, she dies! I bet this is the reason Miles has such a hard time getting close to people. Since Aaron (Zak Orth), Maggie, Charlie, Miles and Nora (Daniella Alonso) have reunited, they are just a day behind Danny and Captain Neville (Giancarlo Esposito) and they’re making good time until the crazy man with his attack dogs shows up on the scene. When one of the dogs bites Aaron, Maggie kills the dog, but that sends the man into a tailspin of revenge and he winds up stabbing Maggie in an artery in her leg.

The group (now also containing Nate because he’s just too cute to kill) finds refuge in an old diner from the salivating dogs circling outside. Charlie is about to sew up the gushing artery with some thread when she is suddenly grabbed by a pair of hands and disappears through the kitchen (it’s the crazy dog man, of course). Miles and Nate take off to save her while Aaron is left to perform the life-saving surgery on Charlie’s only mother figure. No pressure. 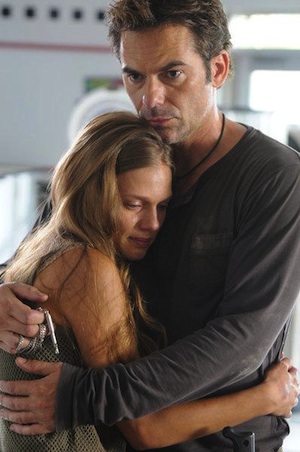 Miles and Nate save Charlie from the creepy man a split second before an arrow shoots through her face! This gives Charlie just enough time to say goodbye to Maggie. Even though Aaron has done all he can, Maggie has lost too much blood. Charlie cries and begs Maggie not to leave her, but she slowly slips away.

After all this girl has been through, can she take losing one more person she loves? At this moment, Miles realizes Maggie was right: He and Charlie need each other. He holds Charlie and promises he will never leave her. Good man. It’s about time. I won’t blame you if you get a little choked up here.

But, just as Miles is starting to turn a corner and feel something in that stoney heart of his, we discover an even darker secret.

Looks like Rachel (Elizabeth Mitchell), Charlie’s mother, left her family behind to meet with the militia because Miles asked her to. Now, she’s being held captive by General Monroe (David Lyons), who is threatening to torture Danny if she doesn’t start answering questions about the power. Looks like what Miles is really trying to run from is his past.

Love the fight scenes in Revolution? Here’s a behind the scenes look at the inspiration and techniques behind the most stylish fighting on TV!