Brennan for president! Why not? She’s brilliant, knows everything about government since the dawn of time, and would promote Booth to head of the FBI. But, much like the wild beast she’s about to come across, is she too untamed to govern the people? 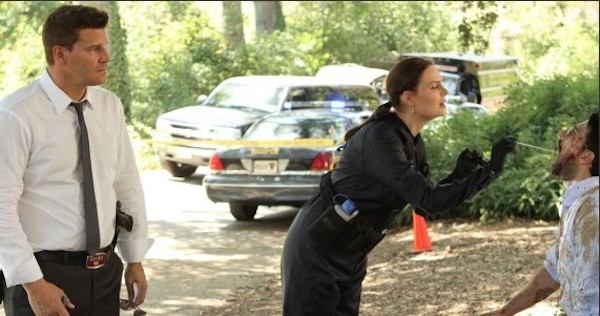 The brilliant Dr. Temperance “Bones” Brennan (Emily Deschanel) is always outspoken and opinionated, so it really was just a matter of time before she dared to enter the political arena. Booth (David Boreanaz) points out to her she’s not exactly diplomatic, or restrained, and really shouldn’t be trusted with nuclear weapons, but she makes her list of pros of why she should run for president anyway. She also uses the investigation as an opportunity to begin her 2016 campaign. There are a lot of issues she’s passionate about, but nothing seems to break her out of her emotionless scientific state-of-mind like animal rights issues.

It all starts when an arguing couple veer off the road, get stuck in a ditch, and unknowingly drive onto a dead body. When the tires spin, it tears the skin off the body, and the face flies out and lands on the poor man trying to push the car. It’s gross.

The faceless body turns out to be Jared Drew, a day laborer who lost his hardware store and his family in the process. After studying his bones and his boots, the team discovers he was recently slashed by a Siberian Tiger and that his last job was most likely at the Exotic Pet Expo. They deduce that he was transporting the tiger to a buyer who purchased him illegally.

Using a camera attached to a small remote airplane, they locate a farm filled with caged exotic animals. When Booth and Bones arrive on the farm, they find the body of of the Siberian Tiger torn to shreds. The buyer shot him because he was out of control and tried to attack the other animals. Wild animals really just don’t have any manners, do they? This is where Bones actually cries for the victim. She declares that when she’s president, the punishment for killing an endangered species would be the death penalty! 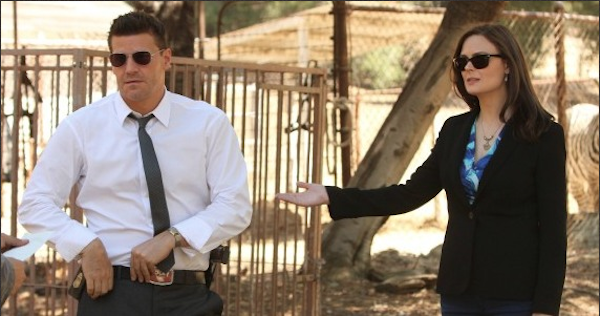 The buyer leads the duo to the man who ran the Exotic Pet Expo. He admits to shooting Jared after the tiger attacked him because he knew it would ruin his business if word got out he was illegally selling endangered animals. I wonder what life in prison is gonna do for business?

On the human side of things, today’s the day Sweets (John Francis Daley) and Daisy (Carla Gallo) are moving in together, and Sweets has a little something to learn about steps in a relationship. While he considers moving in to simply be a “minor commitment” he realizes Daisy has the rest of their lives planned out, from babies to marriage. He looks at the new apartment as if it’s a cage about to trap him and he’s just not ready to be tamed.

On the steps of their new apartment, Sweets hands Daisy the keys and tells her they’re breaking up. You’d think that somewhere between signing the lease and packing, a discussion would have taken place about where this relationship was headed. Oh, well. I wonder if this means Agent Sparks will be returning to rekindle some Sweets romance.

Would you vote Temperance for president? Booth sure wouldn’t! Here’s a little chat with the writer’s of Bones and the many reasons Dr. Brennan would not make a good president.