Jack Osbourne tweeted that he was only celebrating his mother’s birthday in Hawaii this weekend. It turns out that he was there to exchange vows with Lisa Stelly. 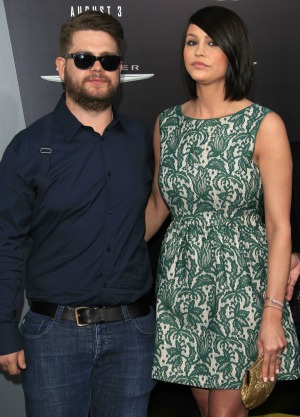 The wedding of Jack Osbourne and Lisa Stelly might have been the worst-kept secret of the weekend. Rumors were floating around that the Osbourne wedding would be happening in Hawaii. The groom quickly took to Twitter to deny any claims that the nuptials were imminent.

Osbourne tweeted, “I love how going to Hawaii with my mum for her 60th has turned into my wedding. Hahaha people are funny.”

Now, according to Hello! magazine, all of those rumors turned out to be true.

The UK magazine received the exclusive on the pair’s ceremony, which took place Sunday on the Kona-Kohala coast. Their vows were exchanged in front of 48 guests, including Osbourne’s famous parents, Sharon and Ozzy, while sister, Kelly, was a bridesmaid. The photos and the first interview with the newlyweds will appear in the magazine’s Oct. 15 issue.

Osbourne has had a tumultuous year that has resulted in a birth, an illness and a firing and, now, a wedding. His daughter, Pearl Clementine, was born in April, yet that happy period was short-lived once he learned of his multiple sclerosis diagonosis in May.

He and his mom both blamed NBC for not honoring his contract for the competition reality show, Stars Earn Stripes, because of his MS diagnosis. His mother threatened to not renew her contract as a judge on America’s Got Talent to stand in solidarity with her son.

The network denied any claims of discrimination due to his illness.

NBC chair Bob Greenblatt stated, “Although we did not ask Jack to participate in the competition, we were able to offer him two substantial alternative roles on the show, both of which he declined. This network does not discriminate on any basis.”

There is no word on Osbourne’s current employment status or his mom’s contract with the talent show.