It was inevitable that the cast of Glee would cover the songs from Grease, so it was surprising to see that it took four seasons to actually happen. 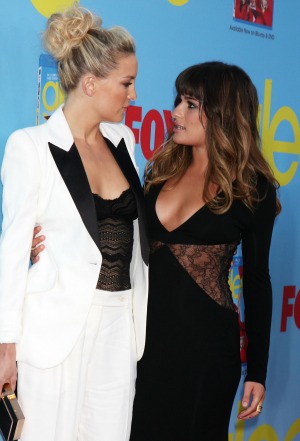 If John Travolta and Olivia Newton-John’s Christmas album wasn’t enough musical excitement for you, how about a new spin on the classic songs from Grease with the cast of FOX’s Glee? Fans of the musical show will be thrilled to know that Glee: The Music Presents Glease will be released on Nov. 6. Yes, you read that right; Glee plus Grease equals “Glease.”

The album will feature a present-day spin on the well-known songs from the 1978 film, including “Born to Hand Jive,” “Summer Lovin,” and “You’re The One That I Want.” The entire TV cast is featured on the special-edition album, with special guest Kate Hudson making a cameo.

Glee made a strong return in its fourth season, after Seasons 2 and 3 failed to live up to the hype of Season 1. Viewership was up for the Season 4 premiere, with over 7.4 million people tuning in to see the new lives of Rachel and Kurt in New York City. This year’s highly anticipated guest stars include Hudson, who plays Rachel’s dance teacher, and Sex and the City‘s Sarah Jessica Parker, who plays Kurt’s boss.

Glee is back with new episodes starting on Nov. 8, with the Grease-themed episode airing on Nov. 15.