Jennifer Aniston inadvertently gave us a glimpse of her huge engagement ring. You did good, Justin Theroux. 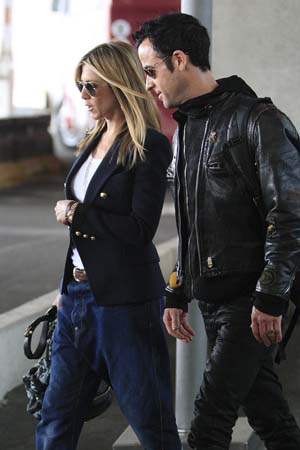 We have a feeling that the photographer that captured this photo of Jennifer Aniston wearing her engagement ring is rolling in the money right now. Cameras spotted the 43-year-old actress sharing a tender moment with her fiancé, Justin Theroux, on the New Mexico set of her new film We Are The Millers.

According to Celebuzz, the oval-shaped rock is worth a staggering $500K.

Is Jennifer Aniston looking for a pre-nup from Justin Theroux? >>

“Looking at the ring, it’s a basic solitaire and a beautiful diamond,” Peter Meksian, CEO and designer with the Michael M collection, told the website.

He thinks it’s about eight or nine carats.

“With emerald and radiant cuts, the larger the diamond gets, the more popular the stone cut is,” he added.

Of course, all of this is speculation — much like all of the other details surrounding the Theroux/Aniston nuptials. Basically, we only know that they are for sure engaged.

Jen Aniston shows off her “preggo” belly in Smartwater spot >>

“Justin Theroux had an amazing birthday on Friday, receiving an extraordinary gift when his girlfriend, Jennifer Aniston, accepted his proposal of marriage,” Theroux’s rep told People in August.

Since then, everyone has been speculating about the date and location of their wedding. A Greek island seems like the likely location, though nothing has been confirmed (shocker).

The actress was reportedly spotted checking out the Elounda Beach Hotel on the island of Crete back in April. The gorgeous oceanfront spot would be nice place to get hitched, namely because it’ll be secluded from the prying eyes of American paparazzi.

As for the ring? Meksian assumes Aniston’s very happy with it.

“Buying a half-a-million-dollar diamond definitely shows someone how much you love them. I’m sure she’s happy,” he said.

Money = love? Dang, there’s no hope for the rest of us!