Lady Gaga couldn’t contain her excitement onstage last Saturday… literally. She hurled mid-set, just like Justin Bieber did last month. Could these strange stage antics be courtesy of a full moon, or are Madonna’s wacky tour ways rubbing off on these stars? 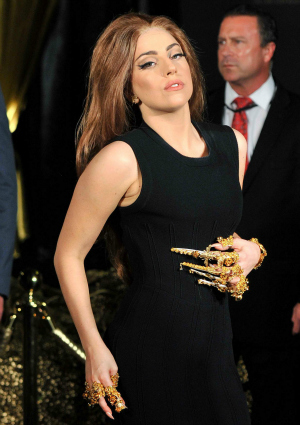 You have to hand it to her… Lady Gaga keeps us guessing. She has delivered countless performances — without ever seeming to break a sweat — that make the trippy boat tunnel scene in Willy Wonka and the Chocolate Factory feel boring by comparison. The woman can suffer through night after night of psychedelic shows and rock dresses made out of meat, but apparently hitting the 23rd song of her 24-song set in Barcelona on Saturday night was enough to make the Mistress of Little Monsters hurl. But, hey, at least she had a sense of humor about it — she tweeted out the link to a YouTube video of the vomiting incident, giving “going viral” new meaning. 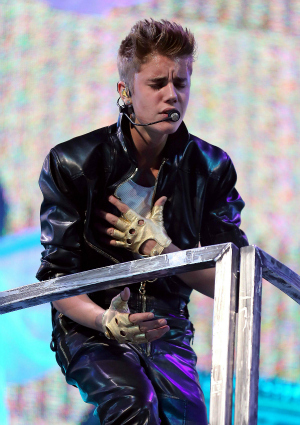 Lady Gaga isn’t the only artist whose own music is making her lose her lunch as of late. During a sold-out Arizona concert at the end of September, Justin Bieber yakked mid-set… twice! While the thought of teenybopper fans plotting stage rushes to salvage the Bieb’s DNA is enough to make us toss our cookies too, we have to applaud the 18-year-old pop wonder for handling the situation like a boss. Not only did he return to the stage after composing himself both times, but the Biebs even quelled his quaking stomach long enough for an encore. And tweeting the classic Anchorman line “Milk was a bad choice” afterwards? Well, let’s just say he earned a few more fans around here — gastrointestinal pyrotechnics be damned. 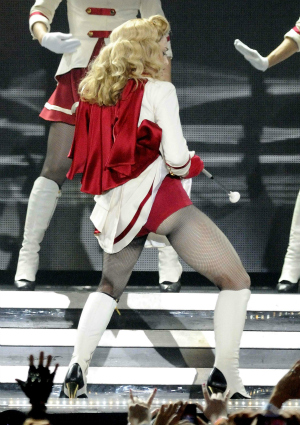 How has Madonna been redefining stage presence on her current tour? Let us count the ways: there was, of course, that whole flashing her 53-year-old nipple during a particularly passionate performance. Then there was that inexplicable incident of superimposing swastikas on a pic of France’s National Front party leader Marine Le Pen. While in France, she also shimmied offstage after performing for only 45 minutes — the audience, who’d paid from $100 to $350 a pop per ticket, responded with obscene jeers instead of enthusiastic cheers. Wait, what have we forgotten? Ohhh yeah, the whole Madge calling buddy Obama a black Muslim and insisting her fans vote for him.

Obama to Madonna: Could you just not? >> 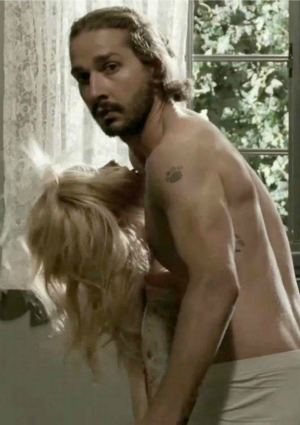 True, Shia LeBeouf typically performs on a different type of stage than the singers above — but it doesn’t mean he hasn’t given the musical arena a go. The result? Eight minutes of a bizarre, partially nude performance for the Icelandic band Sigur Ros (we know, who??). Not that we didn’t appreciate Shia getting a little cheeky to song, but the actor’s foray into lyrical interpretation left us wanting more… in more ways than one. To be honest, we’re still kind of scratching our heads over this one. Maybe next time he decides to take the stage, he should take a cue from Gaga and Biebs and just barf — it would be more interesting than watching another hippie-dippie, butt-flashing ballet worthy of Bjork.