The Avengers are looking for a new leading lady. Scarlett Johansson’s staying put, but she may share the screen with another powerful vixen. Rumor has it that Marvel’s adding another woman to the superhero group. 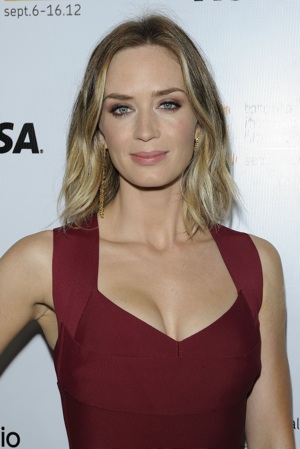 Will Emily Blunt finally step into the Marvel Cinematic Universe? The actress is rumored to be one of two women up for a role in the The Avengers sequel.

The Daily Mail is reporting that Blunt and fellow Brit Ruth Wilson (Luther) are in the running to play Ms. Marvel aka Carol Danvers. In the comics, she was once part of The Avengers team and an integral asset within the S.H.I.E.L.D. agency. She’s not just a pretty face.

Before we get too excited about the character appearing in the film, let’s face the facts. This is the first time we’ve heard of Ms. Marvel’s possible casting, so let’s not get our hopes up.

Marvel Studios is great at hiding major casting news. And yes, the inclusion of Ms. Marvel would definitely classify as major. Fans have been clamoring for her to appear on the big screen for years.

This isn’t the first time Blunt has been up for a superhero role. A few years ago, she was primed to fill Black Widow’s catsuit in Iron Man 2 before being replaced by Scarlett Johansson. Supposedly, she was unable to play the part due to a scheduling conflict with another film. This could be her second chance!

Would you accept Emily Blunt as Ms. Marvel?