Don’t let appearances fool you. There are a lot of secrets hiding behind the beautiful walls of The Drake and they are just dying to escape. 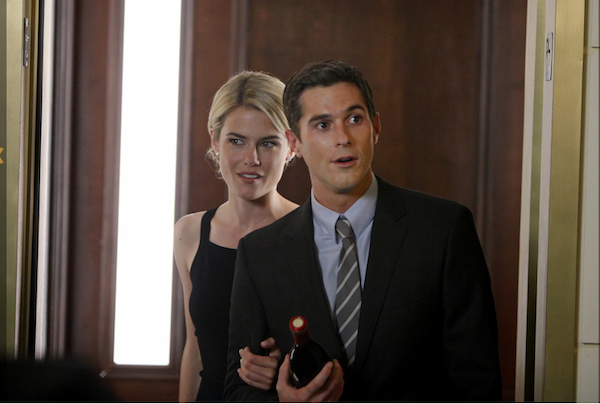 Jane (Rachael Taylor) has a lot on her plate as the new resident manager of The Drake. To start, she has to deal with the mess Mr. Barlow left behind when he abruptly “moved out” (or when Gavin sent him through the wall and he disappeared) last week. While in his apartment she hears scratching from behind the wall. She rips off an area of wallpaper when suddenly a flock of birds bursts through the wall and flies out the window. A sea of black wings fills the air. Just another hassle of managing a possessed building. No big deal.

Nona (Samantha Jade Logan) warns Jane not to mess with the birds, but Jane doesn’t listen and hires an exterminator instead. Turns out Gavin (Terry O’Quinn) isn’t the only one with supernatural powers. Nona has a vision of the exterminator getting brutally attacked by the birds. Later that evening, the birds circle the poor exterminator and attack him one by one until he panics and runs right into the path of a taxi!

Then, forgotten laundry sends Jane to the basement in the middle of the night. She thinks there’s a thief in the building who may steal her clothes, so this is an urgent matter. However, I’m not sure that warrants a midnight trip to the secluded and dimly lit laundry room in the scariest building imaginable, but whatevs.

Downstairs, she sees a door and walks through to find the body of a dead man. Suddenly, she wakes up in her bed! Jane soon finds out that the man she “dreamt about” was actually slain in The Drake in 1966. I think now is a good time to pack up your things and just say “peace out,” but apparently the view at the Drake is worth suddenly being able to see dead people. 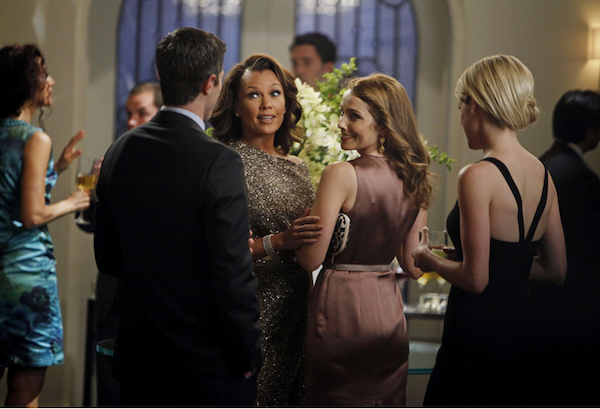 On a beautiful New York evening, Jane and Henry (David Annable) attend a fancy soiree for the residents where they meet Danielle. Danielle is a bit of a creeper, staring at the starry-eyed couple making out on the balcony. Gavin notices she’s alone and sets her up with a man. After a great first date, she sleeps with him only to find out he’s married! She stabs the man, much like she did in 1966 (That’s right! She murdered Jane’s dead dream man), and dozens more. Gavin’s been sending “bad” men her way to get what they deserve for decades. She’s just another pawn trapped in The Drake.

With his wife still in the hospital recovering from her run-in with the elevator, Brian (Robert Buckley) tries to write. But he keeps catching himself looking for the hot striptease-loving neighbor, Alexis (Helena Mattsson). He shuts the blinds, but a moment later they are magically open again. Sure enough, there’s Ms. Victoria’s Secret Catalog sending a flirtatious wave his direction. She’s hard to resist, but he does his best and shuts the blinds. Later, Brian gets out of the shower and discovers Alexis standing there. She kisses him and he seems to lose all power to resist her. Does he sleep with her? They didn’t tell us! Such a tease.

Last on Jane’s to do list is to “take care of the mess in the basement,” per Gavin’s instructions. The exterminator made a hole in the wall that reveals the door she’s been dreaming about. She walks inside and it slams shut behind her! Yes, I jumped a little. Don’t make fun of me.

Check out this clip of 666 Park Avenue stars Rachael Taylor and David Annable talking about their characters Jane and Henry as the venture into the dangerous world of The Drake!