If you didn’t think this chick was crazy before, you certainly will now! 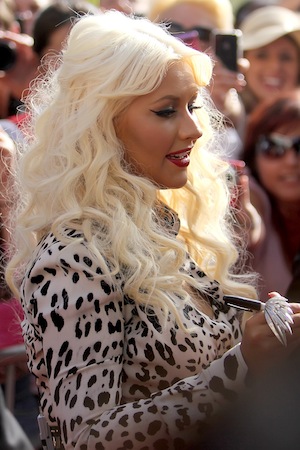 If you are in this woman’s path, get out of her way! There aren’t many people that terrify me in quite the way she does. Christina Aguilera is a diva — in every way, shape (ahem!), and form. I mean, you only think of two people mainly — her or Mariah Carey. Whether she’s making outrageous demands for her dressing room, on her entourage, or for her salary — this woman knows what she wants (she even knew back in the day with What A Girl Wants —  yes, I am that corny).

As of late, she has faced a ton of backlash for her body, and let me just say she has handled it well. Rather than give in to media bullying by starving herself and hiding her shape, she has flaunted it with revealing outfits. Although I do question her choice of attire, I respect the sentiment. ‘Cause something is clearly falling apart if you need all those bandage dresses to keep it together!

So when I heard her next single was called “Your Body,” I commended her. That’s all people think of when they refer to her these days. I know it made me think, “What could this song/video possibly be about?? So why not capitalize on it?! All publicity is good publicity, right?”

When we all heard the snippet and teasers, I could tell this would be a catchy song. But her video is a must-see for several reasons:

Between the bright and flashy outfits, you see her throw her confidence around like a rag doll — ruthlessly. She is on fire vocally, and her first male co-star is quite the hottie. I hear that she has a J-Lo/Casper Smart thing with him, and I can assure you the other gentlemen that are featured in this video are also hot.
She has a Katy Perry, “Waking Up In Vegas” aura about her (the colors, the outfits), but still has an original delivery. She receives her horoscope that she will have a “killer” week, and then we see her murder men after seducing them. Now, if anyone were to be a black widow, we would pick Christina. What I will say is interesting about this video is that it has a comical vibe in the sense that rather than seeing blood as she savagely murders the men, we see glitter and paint (with the exception of the first explosion).
The video may lack some consistency, but it is fun to see Christina have some personality. She usually possesses a purely sexual vibe (with the exception of her earlier music and “Fighter/Beautiful”) — but this has her showcasing an attempt at being… funny?

Hey, for what it’s worth, its a good try!

For more editor’s picks, check these out: