This upbeat music video features a sweet storyline based on meeting the right one. 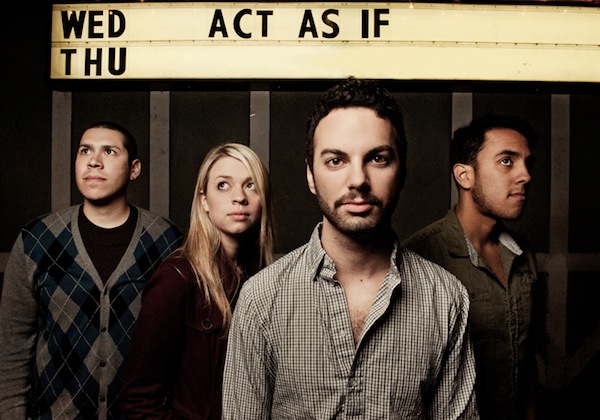 This is a 100% feel-good music video. I haven’t felt this kind of butterflies in my stomach in a while. The video takes place at what seems to be a house party. Granted, the dorky lead character in this video probably would get excited about any pretty girl who returned his gaze. However, these two connect at first glance. This small man (he looks small, I could be wrong) with so much courage (but not as hot as Tom Cruise) is Act As If’s vocal lead, Peter Verdell. The band also stars Diego De La Rosa on drums, David Carrera on guitar, and Sarah Lindsay on keys. It’s hard to find a comparison… maybe a more upbeat version of The Fray or The Script? Or a less emo Snow Patrol?

Time begins to stand still as the guy walks over to talk to the girl. An angelic beam of light shines over her. OK, it’s completely unrealistic — almost a Ted in How I Met Your Mother — moment, but hey, it’s cute and serves its purpose. He walks with her around the party as scenes of the actual band in what seems to be a clearing in the woods are sparsely shown.

Cue the standard party game: spin the bottle (what are we, 12 in 1990?). And oh… wonder what will happen? Rather than being annoyingly predictable, this plot line is actually sweetly relatable. Yes, they end up having to kiss, and they go at it like rabbits.

Now the video’s purpose isn’t to make anyone jealous, or sickened by how seemingly unlikely it would be to meet someone that way. Instead, it’s about believing that magic and “love at first sight” can still happen. It’s a solid song with a hopeful video that ideally will charm you the same way it did me.

For more editor’s picks, check these out: