Miranda Cosgrove has grown up on iCarly, but the show is coming to an end. Before that happens, the show’s cast all make a trip to New York City to visit with Jimmy Fallon. 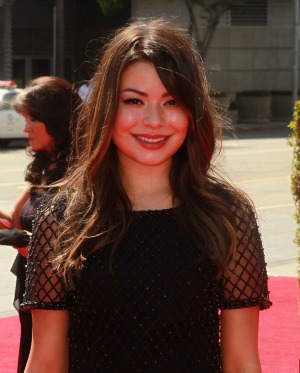 iCarly is headed to Late Night with Jimmy Fallon this week. The (fictitious) web star and her friends will make the trip to New York City for her national TV debut. Star Miranda Cosgrove talked about the great time they had with Fallon.

“The cast gets invited to be on the Jimmy Fallon show ’cause he mentions [us] in his ‘thank you’ note bit,” Cosgrove told MTV. “He mentions iCarly. And then he ends up inviting us all to be in the show.”

“I love her,” Cosgrove said. She added, “Jimmy is awesome. I’ve been able to meet him a bunch of times, just being on the show and at events and stuff. He’s like one of the coolest, nicest guys, so everybody was really excited to work with him.”

While the episode airs Saturday, it was actually shot back in May and was one of the first the show did outside of its set in Hollywood.

“We basically got to go in and work at 12:30 at night, ’cause we filmed after he taped his regular show, and we all kind of have like a similar sense of humor, I think,” she told MTV. “And he just made the scenes really funny. So I’m excited for everyone to see the iCarly episode. It was definitely one of our coolest episodes.”

The series is wrapping up and will air its series finale in November. For Cosgrove, it has been a fun ride, but it’s OK that the show is ending.

“They’ve been saying it’s going to be the final season for a few seasons, and then we always end up doing more episodes ’cause we love making the show,” she said. “We love doing it, and we have the best time ever, but we didn’t want to overstay our welcome, because we feel like it’s something really special.”