A fashion editor learned her lesson by calling Christina Hendricks full figured. While the actress has been called that before, she no longer wants to talk about it. 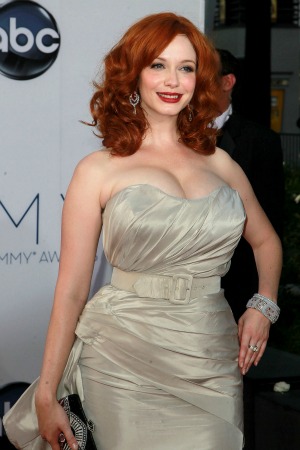 Christina Hendricks has long been the subject of fashion critics talking about her figure. She may not be the same size as other actresses, but she sure doesn’t want you to call her full figured.

A fashion editor for the Sun-Herald was interviewing the actress and asked, “You have been an inspiration as a full-figured woman. What is the most inspiring story that you can remember where you’ve inspired someone?”

The editor also apparently made hand motions in an “hourglass shape” to signify what she meant by full figured.

Hendricks said, “Uh, I don’t know. I don’t know…” and the interviewer, instead of changing the subject, rephrased her question, again using the term “full figured.” Hendricks responded, “I mean, you just said it again!”

According to the Sydney Morning Herald, the interview was restarted, but Hendricks was obviously not happy. She said, off camera, “I think calling me full figured is just rude.”

And while it may be rude, this is one of the first times that Hendricks has reacted this way to a similar question. She was in an interview with Health.com and was asked something similar and did not shy away from answering.

“It’s such a compliment, because of all those times I had agents who were, like, ‘You have to lose some weight,’ and all of a sudden, people are celebrating it,” she said. “It’s like, ‘Oh, thank you! Thank you for letting me be me.'”

But it’s understandable she could just be sick of the question. The Sydney Morning Herald said another reporter on the scene was also told “not to ask any questions about her breasts.”

The Mad Men star should absolutely be proud of her body, but maybe it’s time to stop making a big deal about an actress who is not the same size as everyone else and start celebrating her talent instead.