Anne Heche has to break the news to her BFF that her date just isn’t coming over tonight in the new indie comedy That’s What She Said. 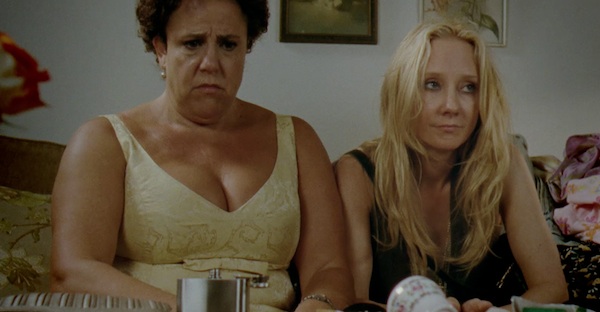 Sitting at home alone staring at your cell phone. We’ve all been there — right, ladies? Well, when you’ve been stood up, there’s no better friend than a smoking, drinking, cussing Anne Heche. She’ll make everything better!

Ladies like sex too in That’s What She Said >>

At least that’s what this down-and-out New Yorker whose life is a mess is trying to do for her bestie in the new indie comedy That’s What She Said.

SheKnows brings you this exclusive clip from the movie that had Sundance audiences laughing in the theaters last winter.

Maybe there’s something wrong with my phone?

That’s What She Said is an ensemble film about three women in New York who are having the worst day of their lives. Heche plays Dee Dee, a woman who has just run into her ex of seven years.

Devastated to find out he’s still with the woman whom he cheated on her with, Dee Dee is going to drink herself into a stupor. Bebe, played by Marcia DeBonis, on the other hand, is about to go on a really important date — that is, if she can stop Dee Dee from ruining every moment of the anticipation.

Why didn’t he call? Doesn’t make any sense.

In this scene, it becomes clear that Bebe’s date isn’t going to show up. Can you relate to this phone-staring tragedy? That’s What She Said is a film about love, life and friendship. It’s directed by actress Carrie Preston of True Blood and The Good Wife fame. The film hits theaters Oct. 19.