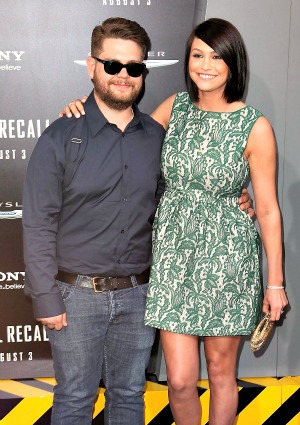 Jack Osbourne‘s wedding date and location have been revealed by relatives of the bride. Lisa Stelly, soon-to-be wife of the 26-year-old, may have a bone to pick with her grandma when she realizes who spilled the beans to the press!

“The wedding is supposed to be this Saturday,” Lisa Stelly’s grandmother Theresa confirmed to Celebuzz in a phone interview.

The future relative of Jack Osbourne went on to detail, “While I can’t make it, I know it’s in Hawaii.”

Larry Chamberlain, another loose-lipped relative of Lisa Stelly, went on to add sweetly, “We really do wish them the very best for a happy life together.”

The marriage will be the first for both Jack Osbourne and Lisa Stelly, who became the parents of daughter Pearl five months ago. Shortly after her birth, Jack was diagnosed with Multiple Sclerosis.

Did you know Hawaii is an especially romantic destination for the Osbournes? Sharon and Ozzy tied the knot while visiting the Aloha State just over 30 years ago! On July 4, 1982, Sharon Rachel Arden exchanged vows on the island of Maui and took the heavy metal rocker’s last name.

Despite the tropical location, it appears the Osbourne wedding weekend will be a formal affair. Lisa Stelly’s nephews have been fitted for white tuxedos in honor of the occasion.

The bride-to-be celebrated her upcoming wedding with girlfriends, including future sister-in-law Kelly Osbourne, weeks ago. Thanking the Fashion Police host for a particularly naughty gift, Lisa Stelly tweeted on Sep. 23, “Thanks @MissKellyO for my diamond encrusted riding crop. I’m obsessed with it, I can’t put it down.”

Early congratulatory wishes go out to Lisa Stelly and Jack Osbourne on their weekend wedding!

23 mins ago
by Ellen Niz