Jennifer Lopez doesn’t do much to stop the engagement talk. After shooting down rumors in June, she is again spotted wearing a ring on “that” finger. 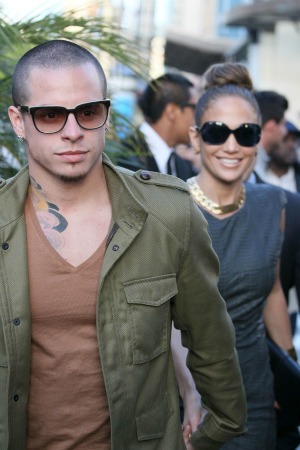 Jennifer Lopez and Casper Smart have been dating for a year now, and they’ve already sparked engagement rumors multiple times. In March, designer Roberto Cavalli tweeted a cryptic note saying that the actress had called him asking for a wedding dress, according to People. But the designer later said that his account had been hacked and that he had not tweeted about a wedding. Lopez also denied the phone call.

And then in June, people started talking about an engagement again when Lopez was seen out with a ring on her ring finger. But she later dispelled the rumors again by posting a note on her website. “

But it looks like Lopez has done it again. She was out in Paris this week and was again wearing a ring on the finger, and apparently it was quite the ring. But sources tell People that the couple are “not even close” to being engaged.

“He can’t afford that ring,” one source said. “This ring could just be for their anniversary. She’s in the middle of her tour, and her manager doesn’t want her distracted. He wants her to focus, and an engagement would distract her too much.”

The actress was very obvious about showing off the ring to photographers, so it seems she is trying to get something across. But the 43-year-old actress and the 25-year-old dancer don’t quite seem like the perfect couple. But stranger things have happened. In the past, very publicly, Lopez has said that she thinks Smart is “so cute,” and Smart obviously feels the same.

People said that Lopez’s divorce from Marc Anthony is “still not believed to be finalized,” so it’s very possible Lopez isn’t even ready to look beyond that yet. But if Lopez and Smart are engaged, it’s pretty possible they wouldn’t tell us right away anyway. So, it looks like we can keep guessing.