Chris Brown is single again after breaking up with Karrueche Tran. Well, he’s really with Rihanna, he’s just not admitting it yet. 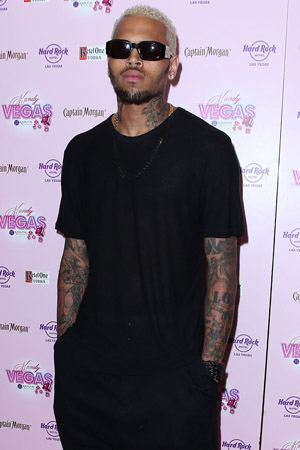 Chris Brown and Rihanna are likely back together. How do we know? Well, there were those photos of them kissing in NYC — and now Breezy has ended his year-long relationship with Karrueche Tran.

“I have decided to be single to focus on my career. I love Karrueche very much but I don’t want to see her hurt over my friendship with Rihanna,” Brown said in a statement. “I’d rather be single allowing us to both be happy in our lives.”

Yeah… we’re not buying that for a minute.

Sources told the New York Daily News that Tran freaked over photos of Brown and Rihanna hanging out (and reportedly kissing) at NYC nightclub Griffin earlier this week. They were also spotted looking pretty intimate at Jay-Z’s concert at Brooklyn’s Barclays Center on Wednesday night.

Sadly, we can’t say we’re surprised that the pair is giving their relationship another go. Rihanna talks freely about her love for Brown — and the pair even kissed at the MTV Video Music Awards in September.

“I lost my best friend,” Rihanna told Oprah during an August interview of the aftermath of the infamous 2009 beatdown the “Look at Me Now” singer gave to her. “Like everything I knew was switched. Switched in a night. And I couldn’t control that. So I had to deal with that, and that’s not easy for me to understand or interpret. And it’s not easy to interpret on camera, not with the world watching.”

“So it’s hard for me to even pay attention to my mind and figuring things out because it now became a circus,” she added.

We hope this won’t end badly, but it probably will.

Do you think Rihanna and Chris Brown should get back together?