Seems like cake is on the menu, because everyone wants his or hers — and to be able to eat it, too. 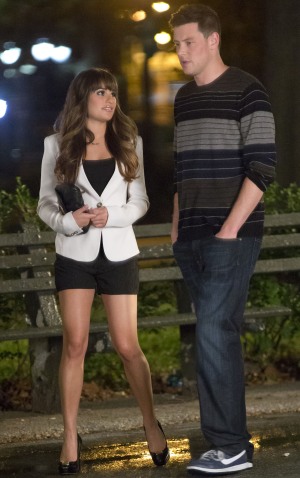 Everyone was paired off like it was Noah’s Ark, and it seems the flood of change has destroyed our favorite Glee couples. Break out the TUMS, because this episode is going to be painful to digest.

Ok, fine, the last one isn’t real — yet. Flashback scenes were shown during the painful, final moments of the breakups, and these couples all had a harsh awakening:

Was Finn born a woman? All his depressing estrogen made me think I was watching Lifetime

If you need a reminder, last week ended with Rachel having a hot date with Brody when a doorbell interrupts their kiss (that I have pretended happened to me for the past week). There’s Finn standing there — unexpected — like a pimple on prom night. Well, this episode begins with Finn and Rachel having spent the night together and Rachel acting all “devoted.” Seriously? Rachel, you skank. And Finn? If that were me, I would have walked away, not walked inside and had a sleepover. Well, Rachel tried to take him around, show him NYADA, prove to him that he can make it in N.Y.C. — all to have him realize this is the place for Rachel, not him. Being semi-honorably discharged for shooting himself in the leg, he was horribly depressing and unbelievably pathetic, often making insecure comments.

The climax happens when a duet between Rachel and Brody at the popular bar “Callbacks” leads up to Finn finding out about their kiss. Even though she stands by being lonely as a precursor for her indiscretion, he sneaks off in the middle of the night while she’s asleep, back to Ohio. Rachel hops on a plane later, confronts him and ends everything — all in the place where they first met. There were moments during this episode that I almost wanted to ship him a box of Tampax, but I figure he has plenty of time now that he’s single. My thoughts? She’s moving forward Finn; you have to stop resenting her for discovering her passions and figure it out yourself!

Don’t judge a book by its cover, because I thought Blaine was a decent guy and Kurt was screwing up things — I was wrong

While Kurt was busy being a corporate slave to Vogue.com, it wasn’t taking much to realize his relationship was suffering. The early moments of this episode show a dejected Blaine, disappointed, like a lovesick puppy, that his boyfriend has no time for him. Blaine has seemed interested in Kurt’s life, but Kurt hadn’t returned that same concern. Fair grounds for breaking up, but not disloyalty — and yes, during a surprise visit to NYC, Blaine reveals he had cheated on him. While I can’t really tell if they are done forever, my thoughts are: Kurt, you may be annoying and we all are wondering how you got into Vogue, but we all do know you can do better.

Well Jake, we get that you like Marley, too, but can you stop being a Chris Brown and stop pretending you actually like your girlfriend?

Jake was dating that annoying cheerleader, Kitty (Becca Tobin). But in most scenes, I couldn’t tell for what reason. It’s the elephant in the room — he likes Marley and they couldn’t control their chemistry this entire episode. She was insecure and sort of catty, insulting his taste in girlfriends. He had not much of an excuse to defend why he was with Kitty. He ends up dumping the girlfriend and even though Marley wants to move in for the kill — he doesn’t seem interested all of a sudden. Bipolar much?

Santana and Brittany? Will and Emma? These are the couples that had the most predictable endings

Santana went away to college, and she has a brain. Brittany is a super senior and does not. Santana grows up and Brittany stays the same. Sad, but come on, not much of a surprise there. Is it just me or do they seem more sisterly than they do romantic? And Will and Emma — if you really even care — he is leaving for a better opportunity in D.C. and wants her to move. She wants to be there for him, but not sacrifice her own happiness. She doesn’t respect that he asked her to leave her home, he doesn’t respect she won’t come. Yawn. Can someone take their CBS retired soap story line elsewhere? I feel like they are so out of place sometimes with the show.

Well, I have to see how this plays out — because I’m emotionally drained and I need to believe in love again, and so do our fellow Gleeks.