The neighbors are in a legal battle over a tree that fell from one property onto another, and the Danes are asking for an apology. 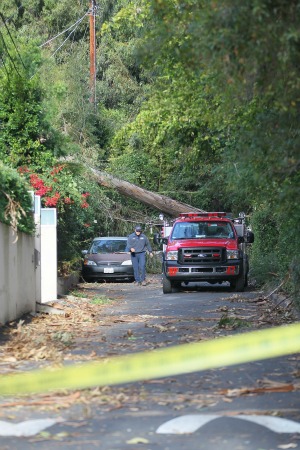 Who would have ever thought a Grey’s Anatomy star would be embroiled in a legal battle with a 1990s alternative rocker? It seems like a story line from a Grey’s episode, but it looks like it has happened in real life in a Los Angeles neighborhood. Even better, the lawsuit is over a tree.

Smashing Pumpkins frontman Billy Corgan is the neighbor of Eric Dane and his wife, Rebecca Gayheart, in Beverly Hills.

“The McSteamys are suing… over a Nov. 30, 2011, mishap, in which abnormally high winds caused a large eucalyptus tree on the rocker’s property to fall on the couple’s Beverly Hills home and apparently wreak major damage,” said E! News.

The network said the lawsuit filed by Dane and Gayheart alleges trespassing, nuisance and negligence.

The lawsuit also says that Corgan knew his tree had a possibility of falling over in the winds common to the area, said E! News, but that he had done nothing about it. When the tree fell, it hit the Danes’ house, causing a break in power lines and damaging the house’s sprinkler system.

“As a result, Gayheart — who was nine months’ pregnant at the time — was forced to evacuate with the couple’s 20-month-old daughter and navigate through a flooding home that was surrounded by ‘live high-voltage wires,'” said E!

The couple says that they have not been able to live in the home since the incident and that Corgan has not shown that he cares.

“Despite his knowledge of the incident and the significant damage it has caused to the Dane dwelling, Corgan has failed to show any remorse, to reach out to the Danes in any way,” said E!

The suit asks for unspecified damages and also demands that Corgan pay to attend to the other trees on the property.

But Corgan told ABC News that he had no knowledge that the trees could fall and that he was “horrified” when he found out about the trees. He said he has done everything he can to rectify the situation.