A tabloid is reporting that Eric Johnson was still seeing his soon-to-be-ex-wife when he started dating Simpson. The story has not been confirmed, but it makes you wonder why the couple haven’t gotten married yet. 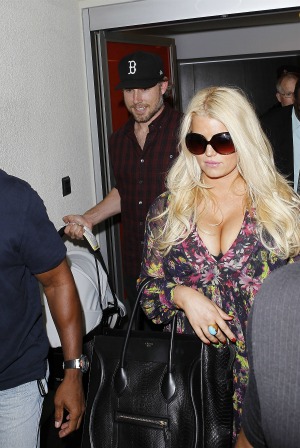 It has been long forgotten that Jessica Simpson‘s fiance Eric Johnson was still married when they started dating. But now, Fox News says that Star magazine is reporting that Johnson had a hard time making up his mind between the two women, so he continued to see both of them until he decided. Star magazine also says that Simpson and Johnson met while he was on a date with his wife, stylist Keri Johnson.

“He’s a two-timing cheat!” the source told Star, according to Fox News. “He was still having sex with Keri after he started seeing Jessica. She [Jessica] needs to think twice before marrying him. He’s already cheated on her once — he’ll most likely do it again.”

Simpson had Johnson’s baby in May, and while the couple say they are engaged, there is no word on a wedding, and they do not seem like they are in a hurry.

“It won’t be this year,” Simpson told Katie Couric in September. “I really want to do a big, fun wedding with my friends and family.”

Simpson has been busy with her new daughter, and since she signed on as a spokeswoman for Weight Watchers, she has been busy losing her baby weight.

Star magazine is a tabloid and did not name any of its sources. But with no foreseeable wedding in Eric and Jessica’s future, it makes you wonder how much of what the couple is saying is true. Until Simpson has that ring on her finger, the gossip will continue, and Eric Johnson’s past will continue to be scrutinized.