Cooper and Short discussed not only whether the stunt was real but whether it’s a sign of what our society has become. Cooper said this would never happen in Grace Kelly’s day. 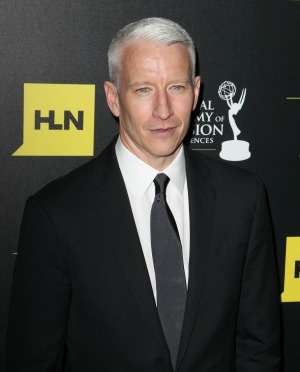 Anderson Cooper and Martin Short decided to venture into reality-show land today on Anderson Live by discussing the controversy surrounding the recently released videotape of Nicki Minaj cussing out Mariah Carey on the set of American Idol. But Cooper seems to think it’s all a bit too convenient for the show.

“I also don’t believe that’s for real,” he told Short. “I think they released that video to build up expectation and hype and get people talking about it. Because those auditions are so controlled, they have all the cameras, who would all of a sudden have a cell phone camera where they could videotape it?”

Short didn’t seem to think that was the issue, though. He said that Cooper just didn’t appreciate what the reality-show art form had turned into.

“I just think it’s so great to see elegance on television again,” said Short, sarcastically. “Did no one at any time, by accident, finish school?”

He continued by further talking about our societal problems and how that all comes back to the possible blowup by Minaj that was videotaped Tuesday and obtained by TMZ.

“I’m tired of the term, ‘diva,'” said Short. “That’s boring and dated. Grow up, show some elegance, and get some manners.”

Short then continued by comparing our society to a pendulum and saying he hoped we had swung as far out as we’re going to get, but Cooper said the pendulum is still swinging outward. He used the Real Housewives of New Jersey reunion as his example.

“Well, as long as there’s people ‘like you’ watching it,” Short retorted. “You know, if no one watched these shows, the pendulum would stop.”

“I’m watching it as an observer,” Cooper responded. “You watch Celebrity Apprentice, that’s the same thing.”

The segment had the audience agreeing on the state of our society, but the two did not return to the subject of whether the videotaped fight between the two “divas” was real or not, and it’s possible we may never know. But one thing we do know is that many people are guaranteed to watch that episode of American Idol when it airs, if only out of curiosity.