Each month Candace of Beth Fish Reads recommends the best in audiobooks, the perfect way to read when you’re on the move. Cassandra Campbell’s expressive narration creates the perfect atmosphere for Donna Leon’s first stand-alone mystery. 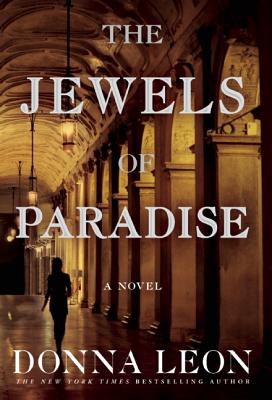 Caterina Pellegrini, an opera scholar, works as a teacher in Manchester, England. Although she is making a go of it, she misses her native Venice, and thus it’s no surprise that she eagerly accepts the first opportunity to return home.

Her new job turns out to be quite strange, however. She is to witness the opening of two trunks that have remained locked since the early 1700s. They are believed to have belonged to a once-famous baroque composer who died childless almost 300 years ago. But Agostino Steffani was not just a composer; he also was a political ambassador and a bishop in the Catholic church with ties to powerful people throughout Europe.

In modern times, two of Steffani’s descendants are quarreling over ownership of the trunks, and Caterina is to help settle the dispute. As she begins to research the composer’s life, she uncovers a centuries-old mystery involving murder, betrayal, and a rumored treasure of jewels. The deeper Caterina digs into the tangled web of the bishop’s life, the more she suspects she is being followed and that her own life may be in danger.

Veteran mystery author Donna Leon is widely known for her Guido Brunetti series, which also takes place in Venice. The Jewels of Paradise is her first stand-alone mystery, and in it she introduces her fans to a new heroine, Caterina Pellegrini.

Although Caterina is a bit of a loner, she relishes life in her city, and Leon doesn’t skimp on the details of the sights and sounds of Venice. It’s easy to picture Caterina grabbing a bit to eat, listening to music, walking the streets, and conducting research in ancient buildings. Classical music lovers will be fascinated by Leon’s attention to historical fact, and everyone will come away with a greater appreciation for the Baroque period.

The Jewels of Paradise is an intriguing mystery that spans 300 years of Venetian history.

Right from the start of the audiobook, listeners are tuned in to the setting of The Jewels of Paradise, thanks to narrator Cassandra Campbell’s ability to slip smoothly into a near-flawless Italian accent when pronouncing names and places.

The mood and drama of the story are enhanced by Campbell’s expressive reading, which keeps a firm hold on listeners’ attention. Modulating her volume and tempo, Campbell captures Caterina’s prickliness and impatience with some of the people in her life as well as her excitement when discovering clues and her fear of being followed. Campbell’s solid performance makes The Jewels of Paradise our audiobook recommendation for October.