Lindsay Lohan was brought to tears by a recent episode of Katie Couric’s show, covering the national epidemic of bullying. Sharing her own story on Twitter, the actress reveals she was picked on in public school. 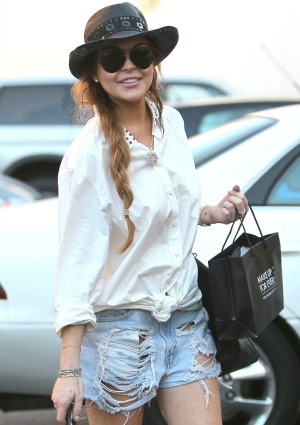 Lindsay Lohan, bullying victim, knows all too well the pain two recent guests of Katie have suffered. Revealing her own story, the actress tweeted personal memories of her own childhood pain.

After watching Tuesday’s episode of Katie, which featured the story of one high school girl nominated to homecoming court as a prank, Lindsay Lohan tweeted, “Katie Couric I think what you did today on your show for Whitney Kropp was lovely.”

The Liz & Dick actress continued, “It had me crying. I’d love to meet her. Stop bullying.”

In a series of tweets shared through Lindsay Lohan’s official Twitter account, the 26 year old went on to say:

“I was actually bullied at my public school when I would leave to film. Whenever I came back . . . girls and boys would call me names.”

“They would also mock me because of my home situation. When people found out that my father was in jail . . . they would yell things, try to trip me and more . . . I moved to home-schooling instead. In 11th grade. I stuck it out for a while.”

“So I can relate to the girls that you spoke with on your show today. I appreciate you reaching out to them. XO.”

Check out a promo of the Katie bullying episode that moved Lindsay Lohan to tears:

Are you surprised to hear Lindsay Lohan is a bullying victim?