When Seth Rogen decides it would be a good idea for his mother to come on the road with him for a business trip, all funny breaks loose in the name of Barbra Streisand. 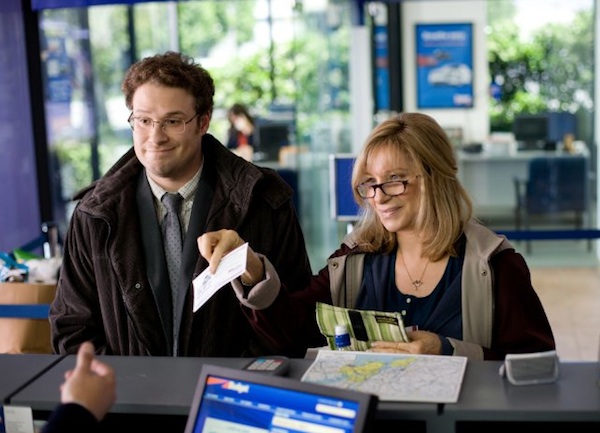 Many of us ladies out here would be thrilled to find out that our mother is the most fabulous Barbra Streisand. But when you’re Seth Rogen and you just want to sell your latest invention, the last thing you need is your mother on your back, and, er… in your car on a very important business trip.

When Andy Brewster, played by Rogen, decides it’s time to take his life to the next level and sell his marvelous inventions, his mother Joyce, played by Streisand, decides it might be fun to go across country with her little boy.

Stalker alert! Seth Rogen’s wife in fear for her life >>

The mother of all road trips!

This is Streisand’s first on-screen appearance since she played Ben Stiller’s wacky mother in 2010’s Meet the Fockers. And aside from her role as Roz Focker, Babs hasn’t been in a movie since she played Rose Morgan in The Mirror Has Two Faces in 1996. The woman with the golden voice turned 70 this summer but she shows no sign of slowing down.

Barbra Streisand is 70, believe it or not >>

Can we pull over please?

From the looks of the trailer for The Guilt Trip, when Rogen and Streisand team up, the comedy is inevitable. This anxiety-ridden duo nearly crashes their car, has dinner in a strip joint and receives suggestive eye movements from a perverted hotel clerk. Whoa! And that’s just in this two-minute preview clip.

The film was written by Dan Fogelman of Crazy, Stupid, Love fame and is directed by Anne Fletcher, who also directed The Proposal and 27 Dresses.

The Guilt Trip releases into theaters Dec. 25. Guess what, Babs, we’re gonna be there!