During a set at the Global Citizen Festival in New York’s Central Park on Saturday, Foo Fighters frontman Dave Grohl made some ambiguous statements. Yesterday, he tried to clarify the state of existence of his post-Nirvana band. 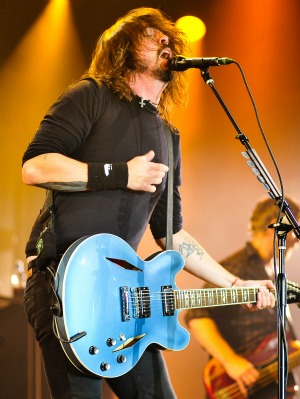 After some confusing talk lately, Dave Grohl of the Foo Fighters issued a statement to try to clear things up.

“Hey everyone … Dave here. Just wanted to write and thank you all again from the bottom of my heart for another incredible year. (Our 18th, to be exact!),” Grohl wrote on the Foo Fighters website.

During the Foo Fighters’ set at the Global Citizen Festival in New York, where they appeared with Neil Young and The Black Keys on Saturday, Grohl told the audience, “This is it, man. We don’t have any [shows] after this,” leading to speculation that the band was breaking up.

A spokesperson for the band soon clarified that the band was just going to take a break. In his statement, Grohl said, “Yes … I was serious. I’m not sure when the Foo Fighters are going to play again. It feels strange to say that, but it’s a good thing for all of us to go away for a while.”

But he reassured fans, “I never want to NOT be in this band. So, sometimes it’s good to just … put it back in the garage for a while … But, no gold watches or vacations just yet.”

Grohl said he would be concentrating on working on a documentary film and album about Sound City Studios, where he and Nirvana recorded its 1991 album, Nevermind.