Attired in bondage gear on the cover of an upcoming issue of British Esquire, Cameron Diaz proves she’s still got it at 40. And, the single actress says, she’s happier than she’s ever been. 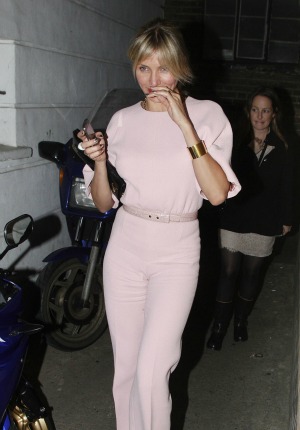 Actress Cameron Diaz, who recently denied romantic links to her Knight and Day co-star Tom Cruise, says that life at 40  is better than ever.

“For the first time in my life I’m content,” said Diaz, who celebrated the big four-oh this summer. “I’m so excited. Getting older is the best part of life. Like, I know more than I’ve ever known. I have gratitude. I know myself better. I feel more capable than ever.

On the cover of the November issue of British Esquire, on sale tomorrow, Diaz proves the point as she poses for photographer Terry Richardson in bondage gear.

In other comments from her Esquire interview, she confirms she’s in no particular rush to tie the knot. “It just wasn’t the thing that I was drawn to,” she said of marriage. “I certainly didn’t want it in my 20s. Or my 30s. So we’ll see!

“It’s funny because as my girlfriends get older, I see how their relationships have evolved, and you know, the people that you’re drawn to changes. I’m not attracted to the same people that I was drawn to during my 20s.”

She said she was looking for something on an “animalistic” level in a relationship, “someone who takes care of themselves, who’s strong.”

The California blonde said she has come to accept life on its own terms. “Contentment is about coming to terms with life as it is, rather than getting all pissed off that things didn’t fit into your little prescribed box. And it’s much bigger.”