In a new interview in the run-up to the opening of the new Bond film, Skyfall, due out next month, Daniel Craig says being Bond isn’t all babes, cars, and high-tech gadgets. 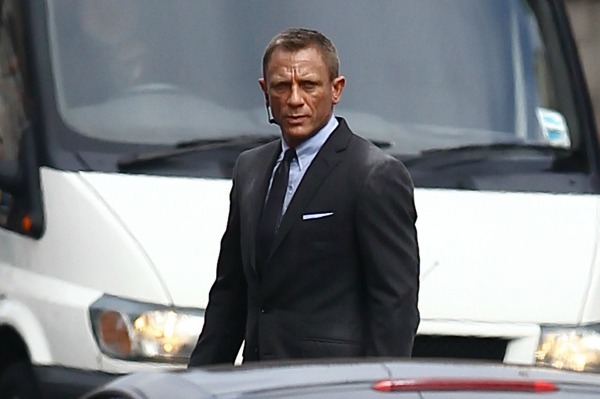 Bond actor Daniel Craig has impressive, manly pectorals, we admit, but he whines just like a little girl about the pitfalls of celebrity.

“You talk to people in the movie business who have been doing this 40 years and they all say the difference is that, back in the day, you could go and have a drink in the bar, get drunk, fall over, have a good time, relax, whatever, and no one would know about it. But now everyone’s got a camera,” Craig says in the November issue of Vanity Fair.

“Not that all I want to do is get drunk in a bar, but that’s an example. So you can’t live a normal life anymore. Because it will become public knowledge that you’ve whatever — gotten drunk in a bar or skinny-dipped on a beach or something. Things that normal people do occasionally.

“I’ve got to be high-class. I’ve done a lot of things in my life. But you have to think in that way. Which is sad, because I like bars.”

The 44-year-old actor, who has previously appeared in the Bond films Casino Royale and Quantum of Solace, also comments on the history of the Bond role, and the actors who have had to fill Bond’s shoes.

“Pierce used to say that it’s like being responsible for a small country. It’s kind of like you have to look after it diplomatically. I kind of get that, but I can’t really say that’s my deal. I’m not going to be the poster boy for this. Although I am the poster boy.”

Still, co-star Judi Dench stands up for our poor, betrodden soul. “The glorious thing about [Craig] is he has a great sense of humor. That’s essential — the whole essence of Bond is that he doesn’t take himself so seriously.”

Should we feel sorry for Bond star Daniel Craig?